Mahindra look to build on results in Europe

A fortnight earlier Miguel was seventh in Qatar, and he places fifth overall in the points in the competitive Moto3 class. Team-mate Efrén Vázquez (26, from Spain) claimed tenth and 14th places, securing an impressive full house of points for the team. 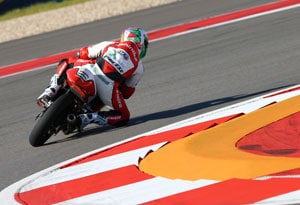 Following its best-ever results in the opening two races of Moto GP in Qatar and the USA, Team Mahindra will look to build on its performance as the European season begins at Jerez this weekend.

Mahindra's new riders and the brand-new Mahindra MGP3O machine have not only achieved double points in the two season-opening 'flyaways' but also recorded the marque's first top-five finish.

That was achieved at the Circuit of the Americas in Texas the weekend before last, when Miguel Oliveira (18, from Portugal) claimed a fighting fifth, gaining two places on the final lap. A fortnight earlier Miguel was seventh in Qatar, and he places fifth overall in the points in the competitive Moto3 class.

Team-mate Efren Vazquez (26, from Spain) claimed tenth and 14th places, securing an impressive full house of points for the team.

This was close to the perfect introduction for the new MGP3O racer, barely six months after the project was initiated, following intensive work by Mahindra engineers and Suter Racing, their partners in the project.

"I think we can be strong and competitive at Jerez. We have a lot of information from pre-season tests, so we can be a little more confident of our chances compared to the previous races.

"It won't be easy, but I am hoping for another good result. The goal is to be consistent and fighting in the top six every weekend," said Oliveira.