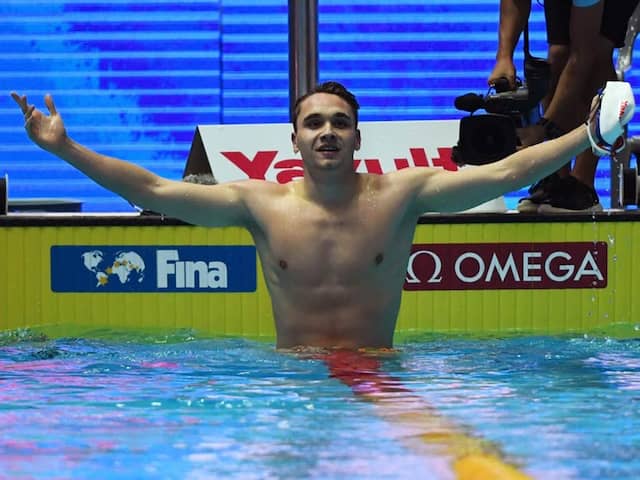 Chinese giant Sun Yang suffered defeat Wednesday after a draining week in which he has clashed with rival swimmers over doping allegations, while Hungarian teenager Kristof Milak smashed Michael Phelps's 200m butterfly world record. Triple Olympic champion Sun had already retained his 200 and 400m crown in Gwangju but he finished a distant sixth in the 800m final behind Italian Gregorio Paltrinieri, who claimed gold in seven minutes, 39.27 seconds from Norway's Henrik Christiansen. A brutal schedule looked to have taken its toll on Sun, who has been involved in angry confrontations with Australian Mack Horton and Britain's Duncan Scott after they snubbed him at two different medal ceremonies in response to bombshell claims made in a FINA doping panel report.

The leaked document alleged Sun allowed vials of blood to be smashed with a hammer after he was visited by testers last year.

"I was exhausted," said the Chinese idol. "My legs and arms felt sore -- the hardest part is juggling a tight schedule, which I will have to do at the 2020 Tokyo Olympics."

An 11-time world champion, Sun accused Horton of "disrespecting China" by refusing to step onto the podium for the winner's national anthem after the 400m final at the weekend.

And Sun, who has complained privately of being shunned by other athletes in Korea, went eyeball to eyeball with Scott after Tuesday's 200m medal presentation.

The Briton ignored Sun's offer of a handshake and would not join him on the top step for photos, sparking a fiery reaction from the Chinese star.

The 27-year-old wagged his finger in Scott's face and yelled: "You loser, I win!"

Both men received formal warnings from FINA, as did Horton, but several athletes have come out in support of their silent protests.

After taking bronze in Wednesday's 200m fly, South African Chad le Clos said: "What Duncan did was fantastic. He didn't shake his hand and I respect that -- great move by him."

Horton called Sun a "drug cheat" at the 2016 Rio Olympics in reference to a three-month ban Sun had previously served for taking a stimulant he has always maintained was approved medication for a heart problem.

The Australian reignited their war of words with his snub at the weekend, prompting Chinese state-run media to brand him a "clown" and online trolls to leave death threats on his social media accounts.

"It's a tremendous honour to beat such a great record," said Milak, who has already set his sights on next year's Olympics.

"Everyone will try to catch me, but I will be ready."

Elsewhere, Britain's Adam Peaty completed an unprecedented hat-trick of world doubles in the 50 and 100m breaststroke as he romped to gold in the one-lap final in 26.06.

The 24-year-old, who crushed his own 100m world record earlier this week, became the only swimmer to win six breaststroke world titles.