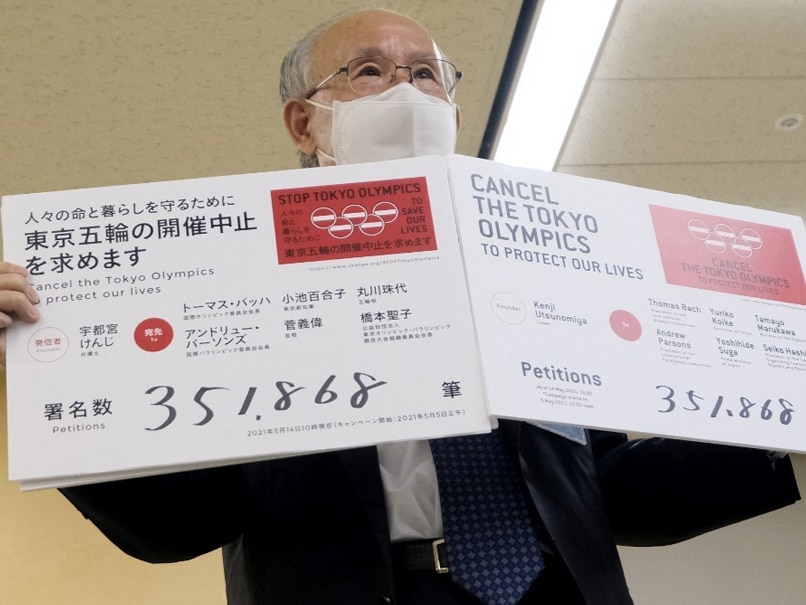 There has been a growing chorus asking for the cancellation of the Tokyo Olympics.© AFP

Japan's Asahi Shimbun newspaper, an official Tokyo Olympics sponsor, called for the Games to be cancelled on Wednesday, in the latest sign of opposition less than two months before the opening ceremony. The call comes with public opinion in Japan firmly against holding the Games this summer, and after prominent business leaders voiced their concern in recent weeks. Organisers of the Tokyo Olympics insist however that the Games are on, saying an extensive rulebook will keep athletes and the Japanese public safe.

The Asahi daily's editorial urged Prime Minister Yoshihide Suga to "make a calm, objective assessment of the situation and make the decision to cancel this summer's Olympics".

The paper said it "cannot accept the gamble" of holding the event, despite organisers' assurances it will be safe.

It also accused International Olympic Committee leaders, including vice-president John Coates, of being "self-righteous" and "clearly out of step" with the Japanese public.

When asked last week if the Games could be held even during a virus state of emergency, Coates said "the answer is absolutely yes".

Tokyo and other parts of Japan are currently under a state of emergency, which is expected to be extended this week until June 20.

"Saying 'yes' without demonstrating any clear grounds for it once again drove home the self-righteous image of the IOC," the Asahi editorial said.

Tokyo 2020 CEO Toshiro Muto said it was "natural" that "different media organisations have different views", but acknowledged that people are "anxious".

"The national and local governments have put stringent measures in place to contain the spread of infections, and we believe the situation will improve as a result," he said.

Muto added that no executive board members had called for the Games to be cancelled or postponed.

Two prominent figures in Japanese business have also voiced opposition to the Games in recent weeks.

Masayoshi Son, head of tech investment behemoth SoftBank Group, tweeted on Sunday: "Do the IOC have the right to decide if it's held or not?"

"If you think about what people have to put up with, we might have a lot more to lose" if the Games go ahead, he added.

"The risk is too big and... I'm against having the Tokyo Olympics this year," he told CNN.

"No change" on Games: US

"There are a considerable number of Japanese people who are concerned," she told an executive board meeting.

She reiterated that the number of overseas participants would be capped and they would face tough restrictions while in Japan, and that the Games would not place extra stress on overstretched local medical system.

Muto said the number of medical staff required for the event would be reduced by around 30 percent of the original figure.

Japan has seen a comparatively small outbreak of the virus, with fewer than 12,500 deaths, and has avoided the harsh lockdowns seen in some places.

The current virus emergency mostly limits the sale of alcohol in restaurants and bars, and forces them to close early.

But the government faces criticism for a comparatively slow vaccine roll-out, with no date yet set for expanding jabs beyond medical workers and the elderly.

An exception will be made for Japan's Olympic athletes and some staff who will get early jabs courtesy of doses donated by Pfizer.

Those vaccinations will start from June 1, with doses going to around 600 athletes and 1,000 coaches, training partners and other members of staff, according to Japan's Olympic Committee.

IOC chief Thomas Bach said last week that most athletes and team members staying at the Olympic village would be vaccinated by the time the Games begin.

But earlier this week, with less than two months to go before the opening ceremony, the US State Department issued a travel warning for Japan over virus risks.

The White House said Tuesday that it supported plans to hold the Games, with press secretary Jen Psaki saying "our position has not changed on the Olympics".

"There are very specific entry and movement rules and procedures which the organisers have laid out in order to ensure the protection of everyone involved," she added.

But the Nomura Research Institute warned that the country could suffer even greater economic damage as a result of holding the Games, if a spike in infections led to a new state of emergency.