Since millionaire promoter Barry Hearn took over the world professional snooker body, he has made dramatic improvements in terms of the number of tournaments, the prize money, and snooker's presence as a major international sport. 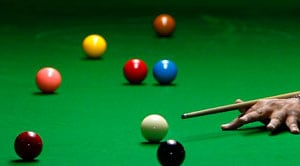 Besides the total prize-money of 300,000 pounds (Rs.3 crore), next week's World Snooker Indian Open here will see another 45,000 pounds (Rs.45 lakhs) up for grabs for the player who makes the 147 maximum break.

The World Snooker operates a 'rolling' prize system for a 147 maximum break. At the final stages of every ranking event, the prize is 5,000 pounds and if there is no 147 made, this money rolls over to the next tournament.

For the Indian Open, scheduled for Oct 14-18, the prize will be 45,000 pounds as there have been no 147s in the final stages of a ranking event since the 2012 UK Championship, according to Ivan Hirschowitz of World Snooker.

Since millionaire promoter Barry Hearn took over the world professional snooker body, he has made dramatic improvements in terms of the number of tournaments, the prize money, and snooker's presence as a major international sport.

This season, there are over 30 tournaments on the professional circuit. The top prize at the World Championship this season will be 300,000 pounds which will be the biggest ever prize in snooker.

The sport is also gradually gaining a global presence and a growing audience, both television and on-site. This season China is hosting nine tournaments while there are events in Australia, Thailand, Germany, Bulgaria, Poland, Belgium, The Netherlands and the UK.

The sport is televised in over 75 countries with a global broadcast footprint of nearly 500 million. It achieves massive viewing figures in China and is also very popular among TV audiences in the UK and Europe. On Eurosport, snooker reaches over 100 million viewers per year.

Snooker is also very popular as a live sport. In The UK, the World Championship at the Crucible in Sheffield, the 1000-seater arena, is sold out for virtually every session for 17 days, according to Hirschowitz.

Other events like the UK Championship in York and the Masters in London also attract great crowds. Ticket prices can be anything from five poubds up to 60 pounds.