Aditya Mehta, ranked 72nd, could have won comfortably against the World No.18 Welshman whose famed potting seemed to have deserted him as he missed at crucial moments. 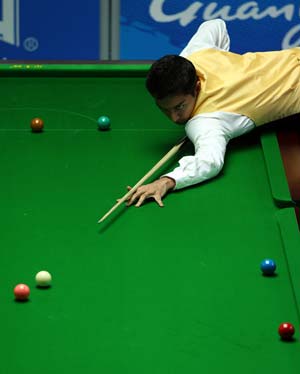 Pankaj Advani and Aditya Mehta came through gut-wrenching matches to set up a quarterfinal clash in the Indian Open World Snooker professional ranking tournament in New Delhi on Thursday.

While Advani came back from the brink of a certain defeat to beat World No.12 Stuart Bingham 4-3, Mehta survived a thrilling sixth frame to overcome double World Champion Mark Williams 4-2. The two Indian cueists will face off at 8 p.m.

Mehta, ranked 72nd, could have won comfortably against the World No.18 Welshman whose famed potting seemed to have deserted him as he missed at crucial moments.

In the sixth frame, 27-year-old Mehta missed a sitter black after taking the last red when leading by 26 points. The black rolled to the edge of the top left pocket and was to play a lead role in the drama that followed.

The 38-year-old Williams went on to sink the red followed by colours up to the blue that he missed with Mehta, leading 58-41. With just the blue, pink and black on the table, the pair traded safety shots.

Until then, Mehta was in control with Williams just unable to get going after winning the first frame with a small break. Mehta took the next two frames on the back of 54 and 66 breaks only to have Williams levelling at 2-2 after a scrappy fourth.

Mehta played solidly on the colours to take the fifth and was poised to take the sixth when he missed the black that in turn set up a dramatic finish.

"These are the situations we come across a lot of time but I held my nerve. The result only goes to show how unpredictable and competitive professional snooker is," said Mehta.

On the black that he missed in the sixth frame, Mehta said: "I was shocked when the black didn't drop and left hanging in the jaw. Yes, it could have become 3-3 instead of 4-2 but I was prepared for the seventh frame."

Earlier, 28-year-old Advani was looking down the barrel of the gun in the seventh frame only to be let off when World No.12 Bingham fluffed a sitter red and left it in the jaw of the top corner pocket.

"I am relieved to get through this match. Stuart is a fluent and attacking player but I got back my safety play and I thought I was much more solid than in my previous match," said Advani.

Advani, ranked 70th, grabbed the opportunity to run up a break of 86 clearance to clinch the frame and match. Advani took the first frame but Williams responded to pocket the second.

Advani won the next two frames but the Englishman retaliated by winning the fifth and sixth frames to push the match into the decider, which he won.

Meanwhile, Scotland's 22-year-old Stuart McGill too advanced to the quarters overwhelming Joe Perry of England 4-2, aided by a break of 138 in the last frame.

On another table, China's World No.4 Ding Junhui knocked out four-time World Champion John Higgins 4-2 while Robbie Williams overwhelmed Joe Perry 4-2 to book quarterfinal berths as also top ranked Neil Robertson of Australia, who got past China's Ling Yenbo 4-2 with a century of 100 in the sixth frame.