In the absence of spectators, Olympic gymnastics champion Lefteris Petrounias ran a lap with the flame and Olympic pole vault champion Katerina Stefanidi lit a cauldron inside the all-marble Panathenaic stadium, where the first modern Olympics were held in 1896. 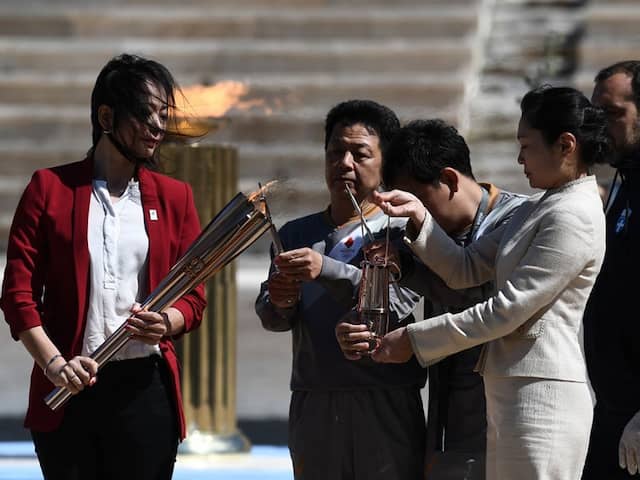 The flame was handed to Tokyo 2020 representative Naoko Imoto.© AFP

Greece on Thursday handed over the Olympic flame to Tokyo 2020 organisers at a ceremony held behind closed doors amid calls for the Olympics to be postponed over the coronavirus pandemic. In the absence of spectators, Olympic gymnastics champion Lefteris Petrounias ran a lap with the flame and Olympic pole vault champion Katerina Stefanidi lit a cauldron inside the all-marble Panathenaic stadium, where the first modern Olympics were held in 1896.

The flame was then handed to Tokyo 2020 representative Naoko Imoto, a swimmer who competed in the Atlanta 1996 Olympics. Imoto, a UNICEF representative, was reportedly a last-minute appointment as she already lives in Greece and did not have to travel from Japan.

Greek President Katerina Sakellaropoulou in a statement said the ancient Olympic values of "concord, goodwill, brotherhood... are the weapon to use" against the virus.

Last week's flame lighting ceremony in ancient Olympia was also carried out without spectators as Greece registered its first death from the virus.

"Regretfully the COVID-19 outbreak made us take hard decisions and change our initial plans. We deeply regret that you... were not able to travel to Greece and join us here today,"  Greek Olympic Committee chairman Spyros Kapralos said, addressing Tokyo organisers absent from Thursday's ceremony.

COVID-19 has infected more than 200,000 people worldwide and caused over 8,000 deaths across 150 countries and territories. There are five confirmed deaths in Greece. A sixth death was reported on Thursday.

Most major sporting events across the world have been rescheduled or scrapped as a result of the pandemic, and doubts are increasingly being expressed about holding the Olympics in its current slot.

But the International Olympic Committee says it is "fully committed" to holding the Games from July 24 as scheduled.

Top athletes have warned that their training regimes have already been impaired by the pandemic, and that they would be taking health risks should the Games go ahead.

Pole vault champion Stefanidi is among prominent athletes to have voiced concern at the IOC's insistence on holding the Games.

"The IOC wants us to keep risking our health, our family's health and public health to train every day?" she tweeted this week.

"You are putting us in danger right now, today, not in 4 months."