Four-Nation Gymnastics Hints At How Pandemic Olympics Might Work

Japan provided a glimpse on Sunday of what the delayed Tokyo Olympics may look like next summer, as fans attended the country's first international sporting competition since the pandemic shutdown. 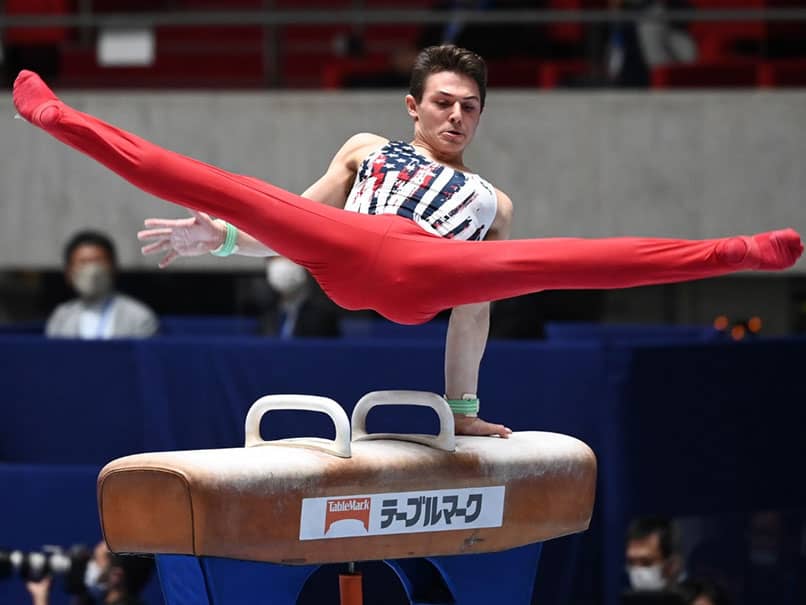 The spectators resorted to polite applause as gymnasts pulled off gravity-defying routines.© AFP

Japan provided a glimpse on Sunday of what the delayed Tokyo Olympics may look like next summer, as fans attended the country's first international sporting competition since the pandemic shutdown. The gymnastics "Friendship and Solidarity Competition" gathered around 30 athletes from Japan, China, Russia and the US to compete in tightly controlled bio-secure conditions. The International Olympic Committee (IOC) and the Japanese government previously agreed to a one-year delay of the Tokyo Olympics to next summer because of the pandemic.

About 2,000 fans in face masks sanitised their hands regularly, checked their body temperature and remained socially distanced at the 8,700-capacity Yoyogi No.1 Gymnasium while being encouraged not to shout to avoid spreading droplets.

Athletes and journalists were subject to similarly strict hygiene measures and were also sprayed with a sanitising mist.

The spectators resorted to polite applause and occasional murmurs as gymnasts pulled off gravity-defying routines and feats of strength.

IOC President Thomas Bach said he hoped the event could demonstrate how Tokyo 2020 organisers could next year hold an Olympics that is safe for athletes, officials and fans.

"With this competition, you are also setting an example that sports can be organised safely even under the ongoing health restrictions," Bach said in a video message at the opening ceremony.

Some medical experts have voiced scepticism about whether the massive international gathering can be held safely in a pandemic, without a vaccine.

'It was extremely fun'

For the Tokyo gymnastics event, the athletes had gone through strict sanitation rules to shield themselves from the coronavirus with at least two weeks of isolation before flying to Japan.

Once in Tokyo, they were immediately placed under strict bio-secure protocols, restricted to designated floors of their hotel, and could only leave to take assigned buses to practice and competition venues.

After the competition, many athletes admitted that they could not perform at their highest level but they understood the restrictions were necessary.

"You must have been able to see it on our faces. It was extremely fun," he told spectators at the closing ceremony.

He made a passionate plea to his compatriots to look for ways to hold the Olympics, as opinion polls indicate most Japanese believe the global sporting event should either be delayed further or cancelled.

"It's not that we cannot hold it," he said. "I hope everyone will come to focus on what we can do so that we can hold it."

Russia's world champion Nikita Nagornyy echoed his competitor's call and said: "For any athletes, next year's Olympics will be the most important competition of their lives."

"Even if these (sanitation) conditions were to be imposed during the Olympics, we are ready to respect them," he said after the event.

"Unless this competition becomes a success, there was a view that it would be almost impossible to hold the Olympics next year," Mori said during the closing ceremony.

Gymnastics and Tokyo 2020 officials were expected to meet within a week to discuss lessons learned from the competition.