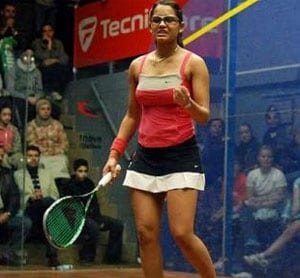 Pallikal, seeded 11th, showed great skill and grit to beat her more experienced opponent. Quick off the blocks, Serme took the first set 3-11, but this was the only set that the Frenchwoman would win in the match.

Pallikal came back strongly and clinched a closely-fought second set 11-9. Continuing her good form, she took the third set with an identical score line and dominated her opponent in the fourth set to clinch the match.

Pallikal said: "I walked into the Australian Open really nervous as I had spent the summer training really hard with Rithwik (Bhattacharya) in Bombay where we had worked very hard on different aspects of my game.

"And after working so hard, you tend to put more pressure on yourself to perform, but with this win I feel more confident. Though I lost the first set, I realised that my strength is my straight game and continued to play just that.

"Camille had played with me on the junior circuit and she had broken into the top 10 on the senior circuit pretty quickly, so I knew this wasn't going to be an easy game.

"As soon as the Australian Open draws were released, I had known that I would be playing against Camille if I came through my first round. So I spent a lot of time analysing her game through videos of her matches, all prepping for this day."

With her win over Serme, Pallikal, who had earlier beaten Australian Christine Nunn 11-5, 11-2, 11-5, will face 19-year-old American Amanda Sobhy who secured her spot in the quarterfinals post a massive upset, beating World No.3 Jenny Duncalf.

Looking forward to her next match, Pallikal said: "Amanda is having a great run at the tournament and will be a tough opponent; tomorrow is going to be a tough day and I have to be at my best."

Comments
Topics mentioned in this article
Tennis Other Sports
Get the latest updates on ICC T20 Worldcup 2022 and CWG 2022 check out the Schedule, Live Score and Medals Tally. Like us on Facebook or follow us on Twitter for more sports updates. You can also download the NDTV Cricket app for Android or iOS.