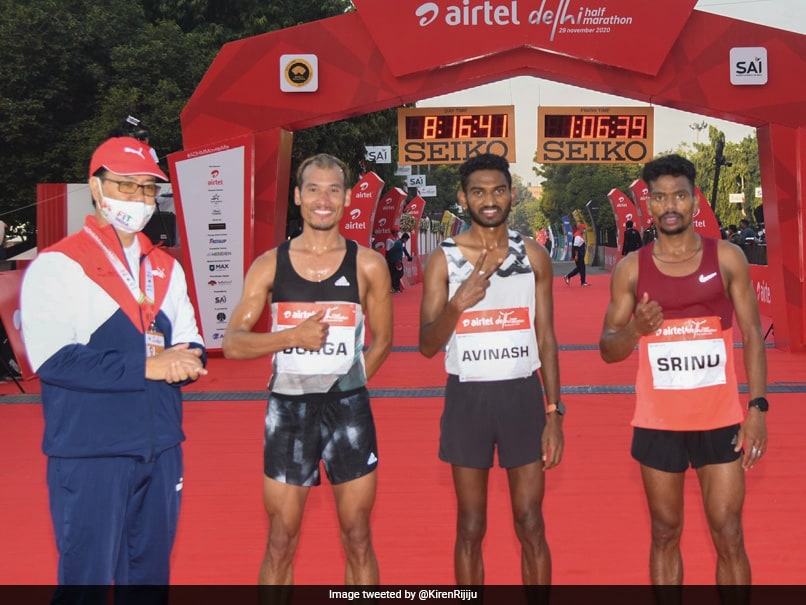 Avinash Sable clocked 1:00:30 in the Delhi half marathon.© Twitter

Tokyo Olympics-bound Avinash Sable smashed the national record while winning the Airtel Delhi Half Marathon gold among Indian elite runners, clocking 1:00:30sec to finish ahead of his compatriots by a long distance in New Delhi on Sunday. The 26-year-old Sable, who qualified for the Tokyo Olympics 3000m steeplechase event during the World Athletics Championships last year, became the first Indian to run a half marathon under sixty one minutes. Such was Sable's commanding performance that he finished the race way ahead of his Indian rivals Srinu Bugatha and Durga Bahadur Budha who finished second and third with timings of 1:04:16 and 1:04:19 respectively.

Sable, from Maharashtra, was 10th overall, with Ethiopia's Amedework Walelegn winning the men's elite race in 58:53.

According to the Athletics Federation of India's official records, the earlier national half marathon record stands at 1:03:46 in the name of Kalidas Hirave of Maharashtra.

Sable also bettered the ADHM course record (among Indians) of 1:04:33 which was in the name of Bugatha, who won gold last year.

He broke his own national record twice during the World Championships and four times in 2019, making an improvement of nearly eight-and-a-half seconds during this time.

Sable,who is currently a havaldar in Indian Army, also won a silver in 3000m steeplechase in the Asian Athletics Championships last year.