Achanta Sharath Kamal, however, had to settle for a bronze after losing the men's singles semifinal while Mouma Das and Manika Batra claimed bronze in the women's singles. 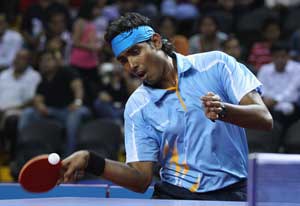 Indian table tennis players finished with a record haul of nine medals - two silver and seven bronze - even as Singapore continued its dominance in the 19th Commonwealth Table Tennis Championships that concluded in New Delhi on Friday.

The hosts won one of the silver medals through Soumyajit Ghosh and Mouma Das in the mixed doubles event, the other having won by the men's team earlier in the tournament.

Achanta Sharath Kamal, however, had to settle for a bronze after losing the men's singles semifinal while Mouma Das and Manika Batra claimed bronze in the women's singles.

At least six of the eight semifinals, including doubles, featured host players but none of them could make the summit clash.

The Singaporeans delivered as expected as they claimed gold in the all the categories except for the women's individual competition that witnessed a major upset.

Canada's Mo Zhang pulled off a surprise 4-3 win over Singapore's world no 27 Mengyu Mu. Zhang, who had missed the team championships due to delay in getting visa, astonished Yu as she quickly slipped into a lead 3-0 in the match. The luck clearly favoured the underdog as she collected several net points. She grabbed the opening three games with identical 11-6 margin.

With just a game away from an improbable win, the Canadian girl looked a touch anxious and made several unforced errors. Mengyu showed her experience and fought her way back into the match. She won the next three games to level the tie. In the decider, Zhang won the women's singles crown.

"It was a tough match. I was not nervous because I knew she was a better player. I am happy that I could win my country a gold medal," said Zhang who migrated to Canada from China in 2003.

The men's singles event saw the top two seed Singapore players, Jian Zhan (25) and Hu Li (55), battling it out for the title. Jian routed his compatriot 4-0.

Singapore won gold in the women's doubles and men's doubles beating England in the finals of both the competitions.

Earlier, a major upset for the hosts came when the duo of Kamal and Subhajit Saha were beaten by inexperienced English pair of Christopher Doran and Samuel Walker in the semifinal of the men's doubles. The defending champions failed to match the exuberance and agility of the young English pair and lost the tie 11-4 8-11 11-6 10-12 7-11.

In the individual event, Kamal (70) tried hard to match the swiftness of Hu Li, Singapore's world No 55 in the semifinals, but failed to finish off the games. In the first game, the 31-year-old Indian made a costly service error when he was 10-10 after coming from behind. He conceded a point as his serve found a net. So frustrated by the miss, he threw his racquet in the air after losing the game 12-10.

Li, who had beaten Kamal in the team competition earlier, showed no charity to the local favourite in the next game as he rounded it off 11-7 to lead the match 2-0. Kamal started off well in the third one and preserved the lead until finishing the game 13-11. He was sending in quick back hand returns and seemed more comfortable in longer rallies.

In the fourth, the two competitors were neck and neck with Kamal just a point behind at 7-8. The Indian veteran made yet another error on his serve this time around as he failed to connect the ball to his racquet. The Singaporean went on to wrap the game 12-10.

Li was ruthless in the final game as he won it 11-4 to completed a 4-1 verdict in his favour.

In the women's singles, Mouma fought hard before failing to stop Mengyu Yu -- the number one seed in this competition.

Both competitors put up an attacking display before Das lost the match despite leading 2-1 in the semifinal tie.

In the other women's match, Batra failed to breach the defense of Canada's Mo Zhang. The 18-year-old Indian was erratic in her shot play and gifted her opponent some easy points in the last four encounter.

Her inexperienced showed in the match as she went onto lose the first game 9-11 despite being 6-0 ahead. Zhang was not very clinical as she allowed her opponent to make a comeback after taking lead. Both TT players played safely, relying more on the other to commit mistakes in an encounter that stretched the full distance of seven sets.

Zhang handled the pressure better in the decider to seal the match.

In the women's semifinal, Mouma and K Shamini were tamed by the top seed pair of Feng Tianwei and Mengyu Yu of Singapore 3-0. In the other last four-match too, India's Madhurika Patkar and Neha Aggarwal lost to England's Joanna Parker and Kelly Sibley 3-1.

Comments
Topics mentioned in this article
Formula 1 Cricket Sachin Ramesh Tendulkar Other Sports
Get the latest updates on ICC T20 Worldcup 2022 and CWG 2022 check out the Schedule, Live Score and Medals Tally. Like us on Facebook or follow us on Twitter for more sports updates. You can also download the NDTV Cricket app for Android or iOS.