Scheduled to arrive on the day of Dusshera, IOA had expressed its reservations about hosting the baton relay during the festivities. Organisers of 2014 CWG however could not reschedule the three-day event. 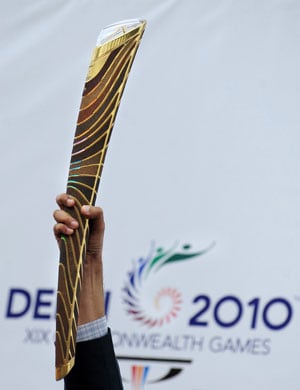 The Indian Olympic Association held an emergency meeting here on Thursday and decided to host the Commonwealth Games 2014 baton relay in the Capital as per schedule. Earlier, the IOA had expressed its inability to welcome the baton as it is scheduled to arrive on October 13 - the day of Dusshera.

Speaking to NDTV, acting president of IOA VK Malhotra said that while an alternative date was asked for, it was not possible to reschedule the relay. "Now as the organisers have decided that they can't change the date, they will be reaching India on 11th. So keeping in mind the security concerns, we are now making a revised of program of their's in India. They will reach India on 11th, on 12th they will be in Agra (at the Taj Mahal) and in Delhi on the 13th," he said adding that the IOA will also speak to the Delhi government.

Meanwhile, a Glasgow 2014 spokesperson in a letter to sports.ndtv.com earlier in the day, outlined the complexities in planning the 248-day relay schedule. "This three-day programme has been developed over many months. These plans have the approval of the Commonwealth Games Federation and are part of a highly-complex Queen's Baton Relay 248-day schedule developed to engage with all 70 nations and territories of the Commonwealth. We look forward very much to bringing the Baton and sharing our excitement and enthusiasm for the Commonwealth Games with the people of India next week, as planned."

Last week however, senior vice-president of IOA, Tarlochan Singh, had spoken to NDTV and been critical of the 2014 organising committee. "The organising committee from United Kingdom wanted the baton relay in India on Dussehra day. It was not possible for us to organise on that day as there are celebrations everywhere. That is their fault, they should have discussed with us," he had said.

Glasgow 2014 spokesperson however informed that all 70 nations are engaged while planning the relay.

"We continue to actively collaborate with the IOA, the British High Commission and UNICEF to ensure all plans are in place. We look forward very much to bringing the Baton and sharing our excitement and enthusiasm for the Commonwealth Games with the people of India next week, as planned."