Two archers from Arunachal Pradesh were not allowed to participate in a world championship event after failing to receive their visas. 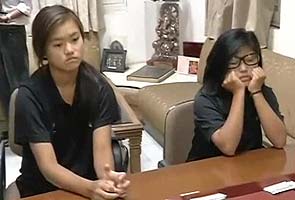 Notwithstanding India's protest, China on Monday strongly defended its decision to issue stapled visas to two Indian archers from Arunachal Pradesh who could not take part in a world championship event.

Though it regretted that the two archers could not participate in the Youth World Archery Championship in central China's Wuxi city, Beijing maintained that the issue of stapled visas was a "flexible move" pending resolution of the boundary dispute.

"We noticed the relevant report. The athletes could not come to China for relevant events. We express our regret," Chinese Foreign Ministry spokesperson Hua Chunying told a media briefing here.

Asked about the controversy generated by China's decision to grant visas on paper to the two archers from Arunachal Pradesh, which China claims as Southern Tibet, Hua said "China's position on the east end of the boundary between China and India is consistent and clear cut."

"China's practice with regard to the visa is a flexible move pending the resolution of the boundary question. This shows China's sincerity and flexibility," she said.

"We hope the Indian side can work with the Chinese side and maintain the sound momentum of personnel exchange and cooperation across the board," Hua said.

India had lodged a protest on Saturday with China on the issue, terming the move as "unsavoury and unacceptable". The protest was lodged two days after Mihu Maselo and Yumi Sorang, the archers from Arunachal Pradesh, were forced to return from New Delhi's Indira Gandhi International Airport for having been issued stapled visas by the Chinese Embassy.

The girls, both 14-years-old, were part of a 24-member Indian squad for the archery championship. They were to board a China Southern Airlines flight to Guangzhou on Thursday night when they were sent back from the airport.

The practice by China of issuing stapled visas for residents of Arunachal Pradesh came to light in January, 2011, when two weightlifters from the state were prevented by immigration officials from boarding a flight from New Delhi to Beijing since they had been given similar visas by Chinese Embassy.

India objects to the issuance of stapled visas for any of its nationals wanting to proceed to China. China's stapled visa policy has prevented residents from the border state of Arunachal Pradesh from travelling to that country, making it a contentious issue in bilateral relations.

On being quizzed further on the issue of why China is opting to give stapled visas when the two countries are holding a series of talks to resolve the boundary issue and whether it would figure during Singh's visit, Hua said, "the stapled visa incident is related to the China and India in the East end of the boundary question."

"It is also flexible way pending overall resolution of the boundary question. This shows the two sides' commitment and sincerity to uphold peace and stability in this area," she said.

"With regard to the Prime Minister's visit, Chinese side attaches great importance to that and we expect that the high level exchanges between the two countries can help maintain the sustainable and steady development and can deepen cooperation across the board," she said.

She said that both India and China are making efforts to the resolve the boundary dispute through a series of consultations.

"With regard to the boundary question between the two countries, we mentioned that this is an issue left from the history," Hua said.

"It cannot be resolved overnight but both sides have the resolve and the leaders of the two countries have the political commitment to peacefully resolve this issue through negotiations and consultations in a friendly manner and jointly safeguard the peace and stability in the boundary area," she said.

Referring to the last month's meeting of Working Mechanism for Consultation and Coordination on India-China Border to discuss issues relating to incursions by Chinese troops at several points along the Line of Actual Control (LAC), Hua said the meeting was successful.

The fourth meeting of mechanism was "successfully" held in the Beijing on September 29-30, she said.

"The two sides had consultations on the boundary question in a friendly atmosphere and reviewed the issue. Since then the two sides have maintained peace and stability and they expressed satisfaction and they also had in-depth exchange of views on maintaining peace and stability and hope to strengthen their capacity to resolve the disputes," Hua said.

Stapled visas became a major issue in bilateral ties when China began issuing visas on paper to residents of Jammu and Kashmir in 2009.

After initially defending the move, saying that Jammu and Kashmir was a disputed issue, China finally rolled back the measure after India took up the case strongly snapping all military contacts.

However, China continued with the stapled visas to Arunachal residents saying that the issue directly related to India-China border dispute.

China claims about 90,000 sq km of territory in Arunachal Pradesh, in the eastern sector of the boundary, while India asserts that China has occupied about 38,000 sq km in Aksai Chin, in the west.