Asian Games venues will be ready before Indonesia hosts the showpiece event in a month, organisers say, but the threat of terror attacks and endless traffic jams still looms over the regional olympics. 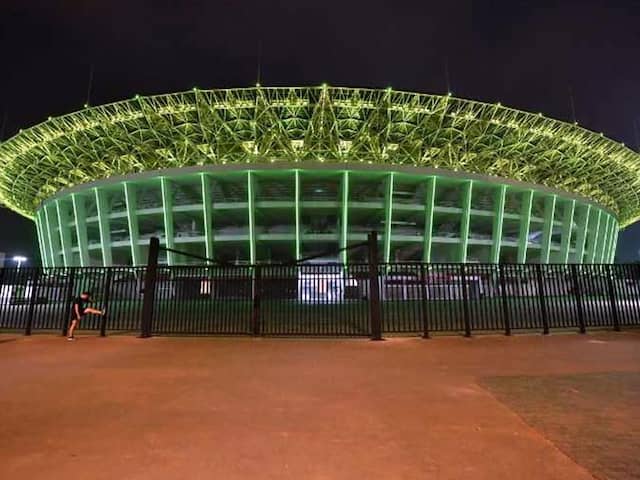 Asian Games venues will be ready before Indonesia hosts the showpiece event in a month, organisers say, but the threat of terror attacks and endless traffic jams still looms over the regional olympics. An army of labourers has been toiling around the clock to finish building work, widen roads and plant trees in a breakneck bid to beautify Jakarta, a teeming metropolis that many visitors find tough to love. The athletes' village looks ready, but some competitors may need nose pegs -- it backs out onto a toxic, foul-smelling river. Jakarta and Palembang in Sumatra are set to host about 11,000 athletes and 5,000 officials from 45 Asian countries for the August 18 to September 2 Games, the world's biggest multi-sport event behind the Olympics.

The Gelora Bung Karno main stadium, used when Indonesia last hosted the Games in 1962, has undergone a major renovation for the 30 trillion rupiah ($2 billion) event.

"I think all the venues, from what I see... 95 percent should be finished by end of July," chief organiser Erick Thohir, a media tycoon who is chairman of football club Inter Milan, said last week.

Indonesia started with less time than most countries. It agreed to host the Games when Vietnam pulled out, citing concerns over preparations and the heavy financial burden.

And then Jakarta moved the Games forward by a year to 2018 to avoid a clash with national elections.

But organisers insist it won't be a repeat of the 2004 Athens Olympics when the main stadium was completed just weeks before the opening ceremony, or Brazil's 2014 World Cup which went ahead in unfinished venues.

Indonesia had problems with the 2011 Southeast Asian Games following corruption scandals and a deadly stampede at the football final.

But the biggest headache at the Asian Games may be getting athletes to venues on time.

Jakarta has some of the world's worst traffic, forcing organisers to come up with drastic solutions.

Athletes and officials will travel on dedicated road lanes while Jakarta has put an odd-even licence plate system in place to limit congestion.

Schools will also be closed to take the daily commute of millions of pupils out of the equation.

Security is another concern with the Games coming just a few months after terror attacks in Indonesia's second-biggest city Surabaya killed a dozen people and reignited concerns about Islamist militants.

Some 100,000 security staff will be deployed in Jakarta, Palembang and West Java, where several events are taking place.

"All safety elements are already in place," said national deputy police chief Syafruddin, who goes by one name.

"We did not only think about security of the athletes, but we are also preparing safety measures for all aspects related to the games... of course the main priority is security."

Police say they have been rounding up terror suspects and petty street criminals in a pre-Games crackdown -- and even fatally shooting some who resisted arrest.

Many Jakartans seem unaware that their city is hosting a major event though, with promotion of the Games noticeably lacking.

"What is it (the Asian Games)? I'm not too sure," said Jakarta-based entrepreneur Widi Astari.

"I think it will be great if the organiser provides tickets for the middle-lower class spectators because I think everybody wants to watch," said Ari Fajar.

About one quarter of the 40,000 tickets available for the opening ceremonies -- the cheapest are 750,000 rupiah -- were snapped up in first week of sale on June 30.

While the Games may not be picture perfect, Jakartan Nia is betting that her country won't embarrass itself.

"At least the outside world will know Indonesia has tried its best," she said.