The Indian team had earlier stunned top-seed Turkey 231-228 to book a place in the final. 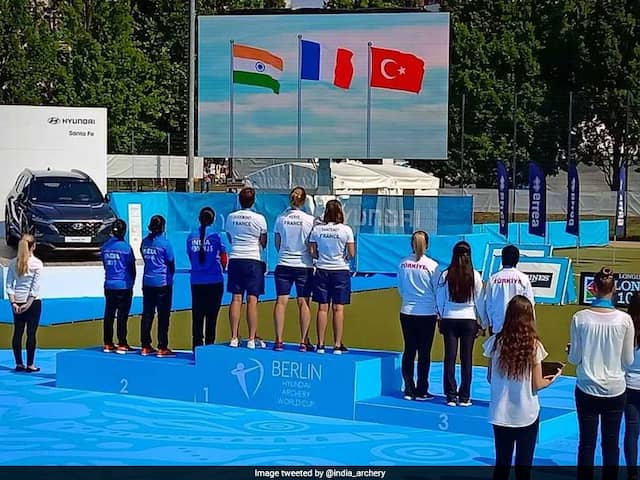 The India women's compound team missed out on a gold by a whisker.© Twitter

The India women's compound team missed out on a gold by a whisker, settling for a silver medal at the 2018 Archery World Cup - Stage 4 in Berlin on Saturday. The team comprising of Tisha Deb, Muskan Kirar and Jyothi Surekha lost by a slender margin 228-229 to France to take the second spot. The Indian trio, who qualified as the fifth-best team for the summit clash, edged past Great Britain 224-223 in the preliminary round, outclassed the US 232-228 and stunned top-seed Turkey 231-228 to book a place in the final. However, in the gold medal match the fifth-seeded India team failed to keep their nerves as they allowed France to take home the gold.

On the other hand, the India mixed compound team of Abhishek Verma and Jyothi Sureka lost in the semi-final but still have a chance of bringing home a bronze medal as they are set to face Turkey in the bronze medal match later on Saturday.

Meanwhile, the India Recurve Mixed team failed to assure a podium spot after being drubbed 0-6 in the quarter-final by Chinese Taipei.

Comments
Topics mentioned in this article
Archery
Get the latest Cricket news, check out the India cricket schedule, Cricket live score . Like us on Facebook or follow us on Twitter for more sports updates. You can also download the NDTV Cricket app for Android or iOS.