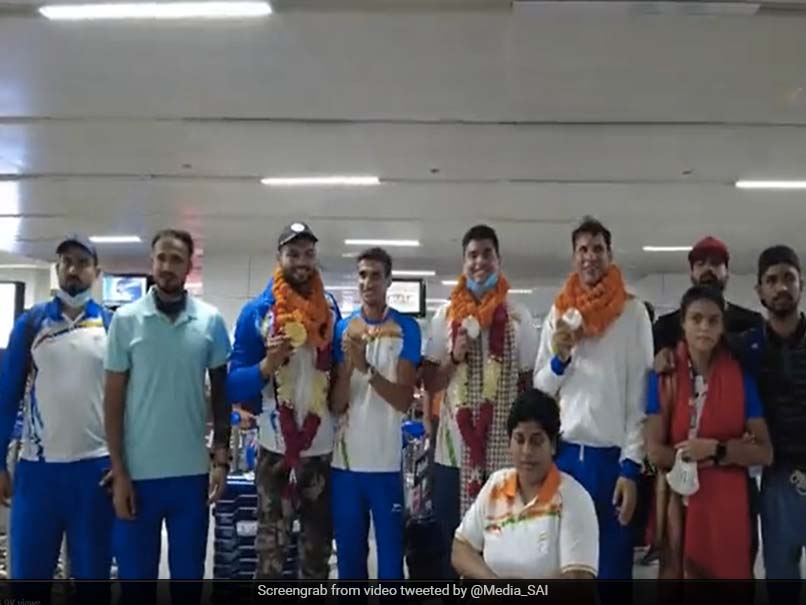 Four Indian para athletes, including javelin throw gold medallist Sumit Antil, on Friday returned home to a never-seen-before boisterous welcome during which supporters and media jostled to catch a glimpse of them at the airport. Chaotic scenes unfolded at the Indira Gandhi international Airport here as fans and an army of media-persons disregarded COVID-19 protocols, jostling for space to get hold of the four para athletes, especially Sumit.

Our Champions are back home and is overjoyed at their arrival. Love & wishes are pouring in for @sumit_javelin @DevJhajharia @YogeshKathuniya@sharad_kumar01

Take a look at the grand reception our Heroes received on their arrival at the airport#Cheer4India #Praise4Para pic.twitter.com/LMEd8n2TsR

"Our Champions are back home and is overjoyed at their arrival. Love & wishes are pouring in for @sumit_javelin @DevJhajharia @YogeshKathuniya @sharad_kumar01," Sports Authority of India (SAI) wrote in a tweet.

The four athletes were welcomed enthusiastically by SAI officials, who garlanded them and presented them with bouquets on arrival.

The athletes, displaying their medals, posed for photographs inside the airport even as fans waved the tricolour and played drums to celebrate their medal winning feats outside.

Supporters, many of them without masks, looked to outpace each other in garlanding the four athletes as they walked out of the airport even as media persons battled to get reactions from the heroes.

Sumit, 23, had smashed his world record five times for the F64 class gold, while Jhajharia, a two-time gold medallist, cemented his status of being India's greatest para-athlete with a F46 category silver.

India's medal tally at the Games has soared to an unprecedented 12 already, including two gold medals. This is the first time that the country has hit the double digit mark at the showpiece.

Comments
Topics mentioned in this article
Other Sports Olympics 2020 India
Get the latest updates on ICC Women's Cricket World Cup 2022 and IPL 2022, check out the Schedule , Live Score and IPL Points Table. Like us on Facebook or follow us on Twitter for more sports updates. You can also download the NDTV Cricket app for Android or iOS.