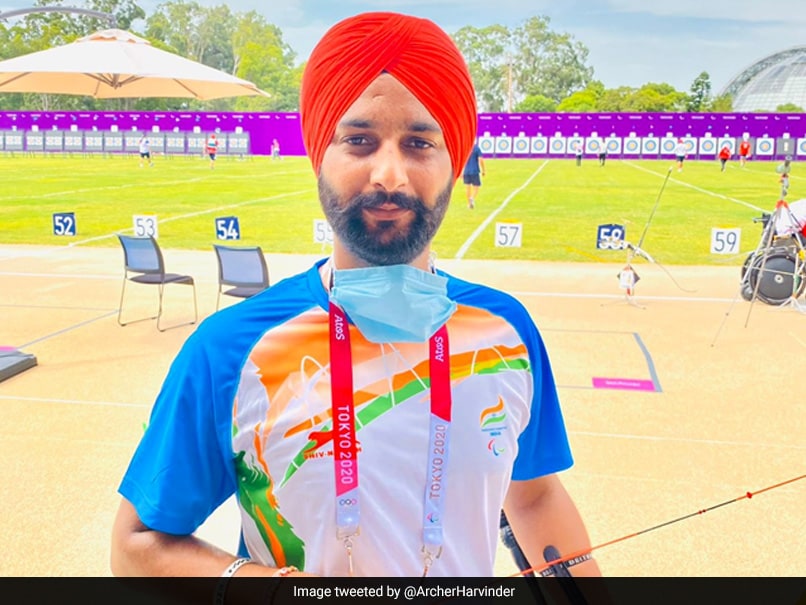 Harvinder Singh became the first Indian to win a medal in archery at the Paralympics.© Twitter

Harvinder Singh became the first Indian to win a medal in archery at the Paralympics with a bronze in the men's individual recurve event in Tokyo on Friday. The Indian won a thrilling bronze medal contest against South Korea's Kim Min Su via a shoot-off to script history for India at the Tokyo Paralympics. Harvinder Singh shot a 10 in the shoot-off in response to the South Korean's 8 to clinch the bronze medal match 6-5. The Indian had suffered a heartbreak in the semis, losing a tightly-contested semi-final 4-6 to USA's Kevin Mather.

In the bronze match, though, Harvinder was in top form. He got off to a brilliant start, shooting a 10 with his very first arrow. He followed it up with a 7 and 9 to take the first set 26-24.

But Harvinder stuck to his guns and kept plugging away. He shot two 10s and a 8 to score 28 points while his opponent could only manage 25 as the Indian took a 4-2 lead.

Needing to win just a single set more, Harvinder started things off well with two 9s while Kim Min Su shot a 9 and an 8.

The Korean, though, managed a 10 with his final arrow as compared to Harvinder's 9 to win the fifth set 27-28 and sent the match into a shoot-off.

In the shoot-off, Kim Min Su was the first to go and he scored a solid 8 points. With the pressure of the bronze medal on his shoulders, Harvinder Singh produced a magical arrow to collect 10 points and with it India's 13th medal in Tokyo so far.

Comments
Topics mentioned in this article
Archery Olympics 2020
Get the latest updates on ICC Women's Cricket World Cup 2022 and IPL 2022, check out the Schedule , Live Score and IPL Points Table. Like us on Facebook or follow us on Twitter for more sports updates. You can also download the NDTV Cricket app for Android or iOS.