Tokyo 2020: Mirabai Chanu shared pictures with her Tokyo Olympics silver medal and said the feeling of having won it is still sinking in. 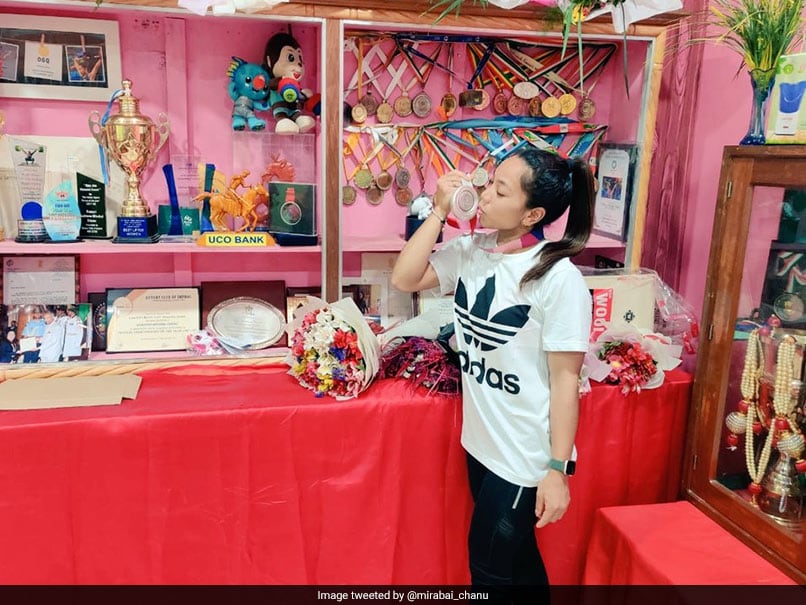 Weightlifter Mirabai Chanu, who won India's first medal at the ongoing Tokyo Olympics, said that the feeling of having won silver is still sinking in. She took to Twitter on Friday to share pictures with her Tokyo 2020 silver medal. "Finally my toil of 4 years came true. The feeling of being able to kiss this medal is inexplicable," she wrote. "Winning this medal is a dream come true for me and I'm still letting this feeling to sink in," she added.

Finally my toil of 4 years came true. The feeling of being able to kiss this medal is inexplicable. Winning this medal is a dream come true for me and I'm still letting this feeling to sink in. pic.twitter.com/BdSpjt9La7

Mirabai reached Imphal on Tuesday after her heroics in Tokyo. She was seen hugging her mother Saikhom Ongbi Tombi Leima and her father Saikhom Kriti Meitei with tears rolling down her face as security guards formed a ring around her.

The 26-year-old lifted a total of 202kg (87kg+115kg) in the women's 49kg category to better Karnam Malleswari's bronze in the 2000 Sydney Olympics. It was also India's first Olympic medal in weightlifting since the Sydney Games.

Mirabai Chanu revealed she had not eaten for two days prior to her competition at the Games.

"I didn't eat anything for two days before the competition because I was concerned about my weight," Chanu had told NDTV after reaching Delhi from Tokyo.

Listen to the latest songs, only on JioSaavn.com
Comments
Topics mentioned in this article
Olympics 2020 India Mirabai Chanu Olympics
Get the latest updates on IPL 2021, check out the IPL 2021 Schedule and Indian Premier League Live Score . Like us on Facebook or follow us on Twitter for more sports updates. You can also download the NDTV Cricket app for Android or iOS.