The team of Sania Mirza and debutant Ankita Raina faces a tough Ukrainian challenge in the opener while Sumit Nagal has got a difficult draw in the singles competition. 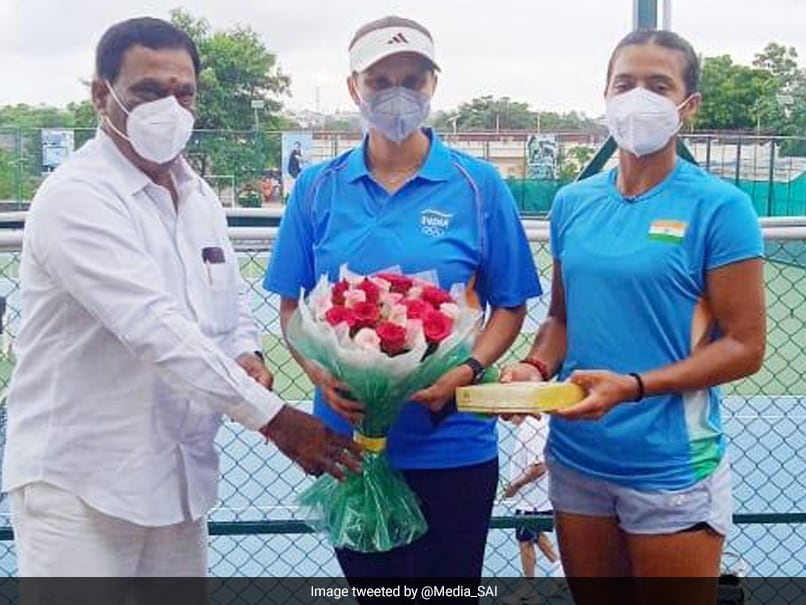 Indian tennis players need no less than a miraculous performance to get close to the medal rounds.© Twitter

Indian tennis players need no less than a miraculous performance to get close to the medal rounds as the team of Sania Mirza and debutant Ankita Raina faces a tough Ukrainian challenge in the opener while Sumit Nagal has got a difficult draw in the singles competition starting on Saturday. Sania, who is making her fourth Olympic appearance, and debutant Raina are going into the Olympics without playing a single competitive match together this year, which is far from ideal preparation for the biggest sporting event on earth. The last time Sania and Raina shared the court was in March 2020 during the Billie Jean King Cup.

They will open their campaign against Ukraine's twin sisters Nadiia and Lyudmyla Kichenok.

"Every match is going to be a challenge and we will take one match at a time. Because of the pandemic and quarantine rules we were playing different tournaments. So after Fed Cup we didn't get a chance to play together," Raina told PTI.

However, Sania has tons of experience and she is playing with a player who is known to punch above her weight while representing the nation.

Raina has a big heart but it will all depend on the performance of Sania, who has not been in the best of form with her serve being an issue.

During the recent Wimbledon championships, Sania gradually upped her game from the baseline but her feeble serve was easily tackled by the rivals.

Interestingly, when Sania returned to competitive tennis after the COVID-19 induced break in March this year, she and her Sloveinan partner Andreja Klepac had faced the same Ukrainian sister pair and had prevailed.

Ranked as low as 137 post maternity break, 34-year-old Sania has played only eight matches this season with a 4-4 win-loss record.

The 28-year-old Raina, ranked 100, has just one singles main draw victory to show since the beginning of the 2021 season.

In doubles, she grabbed her first ever WTA title with partner Kamila Rakhimova at the Phillip Island Trophy in Melbourne in February and broke into doubles top-100 but suffered five straight first round defeats after that.

Had it not been for Sania's Protected Ranking of nine, India would not have a women's doubles team at the Games.

In complete contrast, Nadiia, ranked 44, had played eight WTA Tour events with her sister Lyudmyla Kichenok, ranked 48, in 2020 and one this year.

Together they did not enjoy much success but Nadiia otherwise had decent results with Romania's Raluca Olaru in 2021.

They won the won St Petersburg (WTA 500) in March and reached the semi-finals in Stuttgart (WTA 500) in April and ended runners-up in Bad Homburg last month.

If Sania and Raina win their opener, they could face American eighth seeds Nicole Melichar (doubles world number 9) and Alison Riske (singles world number 36) in the next round.

In the men's singles, Sumit Nagal is extremely lucky to get an entry into the Olympics as with a rank of 144 on the cut-off date of June 14, he was far away from making the cut.

However, a spate of withdrawals pushed him inside.

Nagal's recent performances do not inspire confidence. Though at the start of the season he had pulled off the biggest victory of his career when he beat then world number 22 Cristian Garin.

However, after that he has managed only two quarterfinal appearances at the Challenger level, struggling badly on the Tour.

Nagal had hinted that he was struggling with some health issues and that was the reason for him not getting the desired results.

He faces Asian Games champion Denis Istomin in his first round. The Uzbekistan veteran had won the quota from the 2018 Jakarta Games by taking the men's singles title.

The grinder that Nagal is, there is a possibility of him getting past the 34-year-old Uzbek but the Indian may next face world number two and Australian Open runner-up Danill Medvedev from Russia and that could be end of the road for him.

Comments
Topics mentioned in this article
Sania Mirza Ankita Raina Sumit Nagal Olympics 2020 Tennis Olympics
Get the latest updates on ICC Women's Cricket World Cup 2022 and IPL 2022, check out the Schedule , Live Score and IPL Points Table. Like us on Facebook or follow us on Twitter for more sports updates. You can also download the NDTV Cricket app for Android or iOS.