Prime Minister Narendra Modi hosted India's Paralympic contingent at his residence in New Delhi and they presented him with an autographed stole. 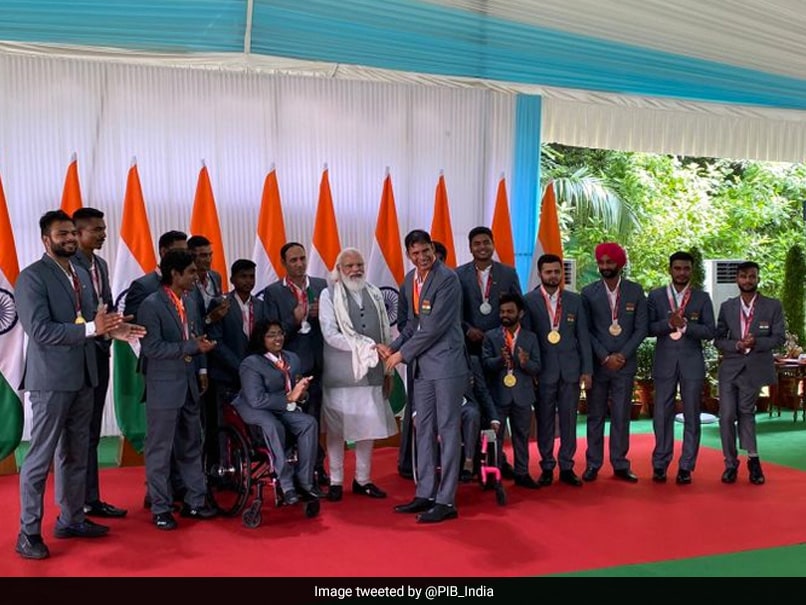 India's Paralympians presented Prime Minister Narendra Modi with an autographed stole on Thursday during a breakfast hosted by him to felicitate the contingent at his residence in New Delhi. The Indian para-athletes returned from Tokyo on the back of a sensational campaign that saw them win an unparalleled 19 medals, including five gold, eight silver and six bronze. This was the country's best-ever Paralympics campaign as it finished 24th in the overall tally. The PM was presented with a white stole signed by all the medal winners, which he was seen wearing around his neck.

PM Modi, who has been the first to congratulate the para-athletes on call after their medal winning feats, was seen talking to shuttlers Suhas Yathiraj, the District Magistrate of Noida, who won a silver, gold medallist Krishna Nagar and young Palak Kohli.

Indian badminton players bagged four medals including two gold, in para badminton, which made its debut in the Paralympics.

Shooters Avani Lekhara and Singhraj Adana, who both won two medals each in the Tokyo Games, also chatted with the Prime Minister.

Lekhara, who was paralysed waist down after being involved in an accident, had scripted history by becoming the first Indian woman to win a Paralympic gold before adding a bronze to her kitty.

The 39-year-old Adana, who suffers from polio, clinched a silver and a bronze.

Comments
Topics mentioned in this article
Olympics 2020 India Olympics
Get the latest updates on ICC T20 Worldcup 2022 and CWG 2022 check out the Schedule, Live Score and Medals Tally. Like us on Facebook or follow us on Twitter for more sports updates. You can also download the NDTV Cricket app for Android or iOS.