Sports Minister Anurag Thakur felicitated the 17 medal-winners from the Tokyo Paralympics on Wednesday. 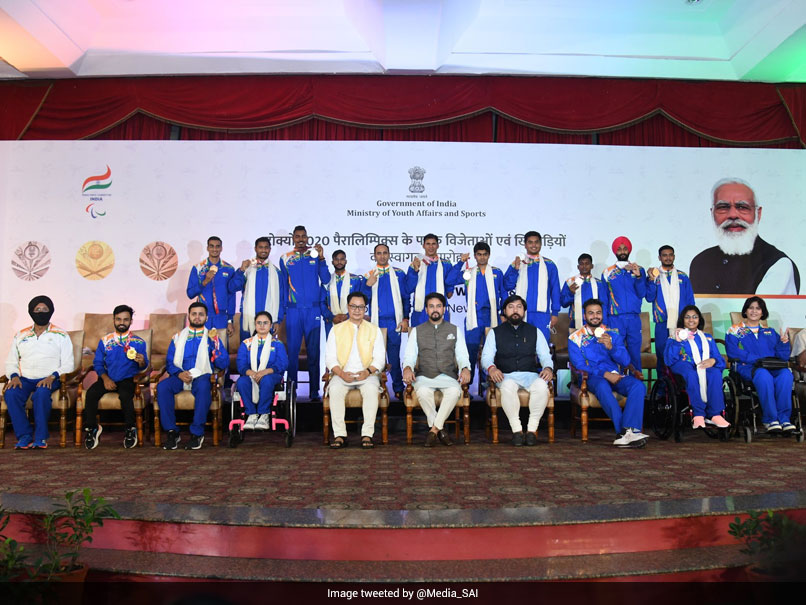 Sports Minister Anurag Thakur on Wednesday felicitated the 17 medal-winners from the Tokyo Paralympics, saying he expects them to shatter more records in the 2024 Paris Games after raising the bar with a stupendous performance this time. The Indian para-athletes registered their best-ever performance in the Tokyo Games by winning an unprecedented 19 medals, including five gold, eight silver and six bronze. Shooters Avani Lekhara (gold and bronze) and Singhraj Adana (silver and bronze) were the ones to finish on the podium twice.

"It was my dream to win a medal for my country and I had trained hard for it. Has it sunk in? not yet. I am so happy and grateful," said the 19-year-old Lekhara, who became the first Indian woman to win a Paralympic gold.

Thakur lauded her and all others who finished on the podium, presenting them with mementos to honour their feats.

"I recall in the 2016 Paralympics, the size of the Indian contingent was 19, while this year the country has won as many as 19 medals. You have shown us that the human spirit is the most powerful of all," Thakur said at the function where the medal-winners were given a standing ovation.

"Our medal tally has increased by about five times. For the first time we have won medals in table tennis and archery, competed for the first time in canoeing and powerlifting. We equalled two world records and we broke even more. India's para athletes delivered a perfect podium finish," he added.

He offered government's full support to the athletes.

"We'd like to encourage more regional and national tournaments for our paralympians so they can regularly compete and better their skills," said Thakur.

The function was also attended by Thakur's predecessor and current Law and Justice Minister Kiren Rijiju and Minister of State for Sports Nisith Pramanik.

Malik thanked the government for constant support. India had sent a 54-strong contingent to the Games, the country's biggest ever.

Comments
Topics mentioned in this article
Olympics 2020 India Olympics
Get the latest updates on IPL Auction 2023 and check out  IPL 2023 and Live Cricket Score. Like us on Facebook or follow us on Twitter for more sports updates. You can also download the NDTV Cricket app for Android or iOS.