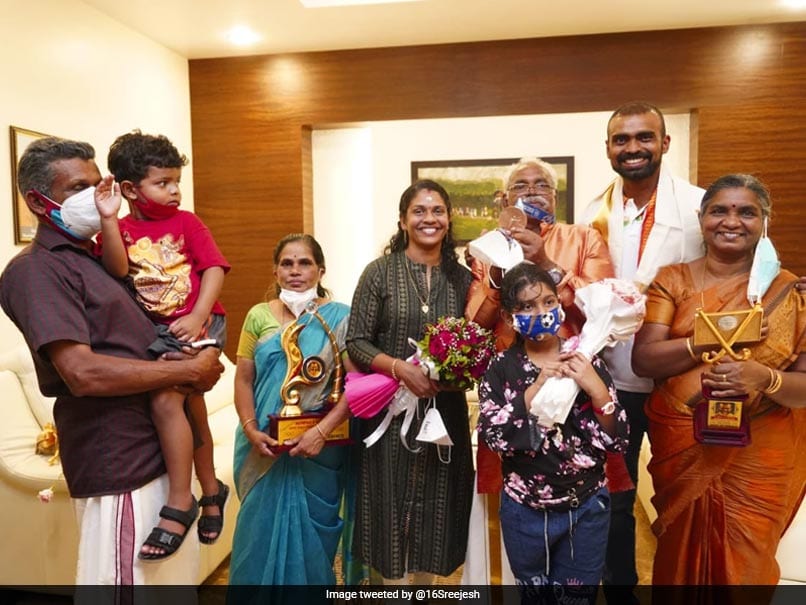 PR Sreejesh posted pictures with his family on social media on Wednesday.© Twitter

India men's hockey team goalkeeper PR Sreejesh took to Instagram to share pictures with his family after returning from Tokyo. Sreejesh received a warm welcome in Kochi after his heroics at the Tokyo Olympics as he reunited with his family. The 33-year-old played a key role as India won its first Olympic medal in 41 years in hockey. "Let me show you what I have got for you," Sreejesh captioned the pictures. India had defeated Germany 5-4 in a thrilling bronze medal match to ensure a podium finish at the Tokyo Games.

In the cliffhanger against Germany, Sreejesh made a remarkable save in the dying seconds of the bronze medal clash.

After winning the bronze, Sreejesh had dedicated his medal to his father. The star goalkeeper had tweeted a picture of him along with a video of his father celebrating the win.

This medal is for you my achaaan ( father )

My hero, he is why I'm here pic.twitter.com/1OdO5eZwaw

India had conceded seven goals against Australia in their second Pool fixture. However, in the very next match, Sreejesh kept a clean sheet as they beat Spain 3-0 to get their campaign back on track.

After the slip-up against Australia, Indian men's hockey team won four matches on the trot to seal a place in the semi-finals.

The Indian side put up a valiant performance against world number one Belgium but came short after conceding three goals in the final 15 minutes of the match.

Comments
Topics mentioned in this article
India PR Sreejesh Olympics 2020 Olympics Hockey
Get the latest updates on ICC T20 Worldcup 2022, check out the Schedule and Live Score. Like us on Facebook or follow us on Twitter for more sports updates. You can also download the NDTV Cricket app for Android or iOS.