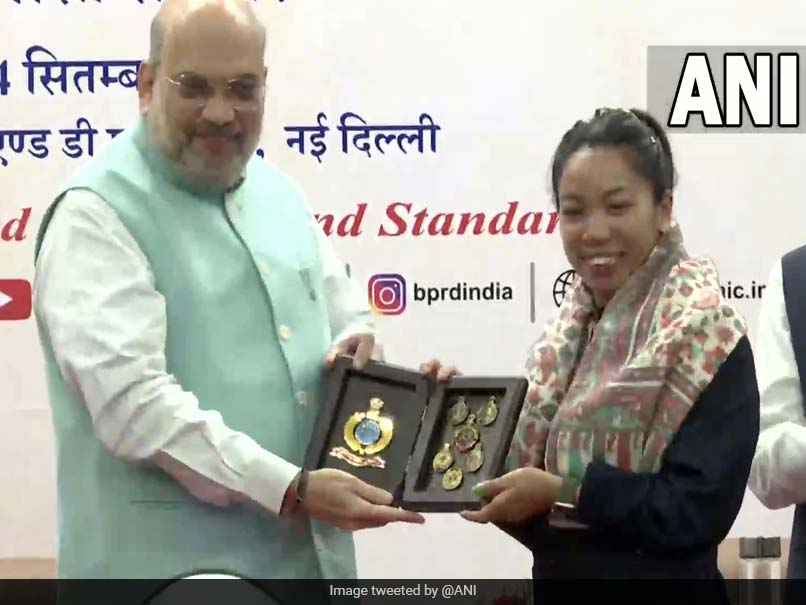 Amit Shah said Mirabai Chanu brought honour for the country by winning a medal at the Tokyo Olympics.© ANI/Twitter

Union Home Minister Amit Shah on Saturday felicitated Olympic silver medallist Mirabai Chanu for bringing laurels to the country in weightlifting. The 27-year-old sportsperson, appointed as additional superintendent of police in her home state Manipur after her heroics at the Tokyo Games, was honoured during the 51st raising day celebrations of the Bureau of Police Research and Development (BPR&D), a central government think tank. Amit Shah presented the athlete with a shawl and memento.

He said Chanu brought honour for the country by winning a medal at the Tokyo Olympic Games and is now a proud member of the police force.

The home minister also thanked the weightlifter for her hardwork and dedication.

"This is a small gesture by BPR&D to welcome her (Saikhom Mirabai Chanu) to the fraternity on behalf of the Indian police," an official statement said on Friday.

Chanu had clinched a silver medal in the 49kg category weightlifting that opened India's account at the recently-concluded Tokyo Olympics. India won a total of seven medals at these Games.

The home minister also gave away trophies and medals for excellence in training to winner states/UTs and central police organisations and forces, and seven authors who wrote on policing subjects in Hindi.

The BPR&D, an organisation under the Ministry of Home Affairs, was founded in August, 1970.

Comments
Topics mentioned in this article
Mirabai Chanu Olympics 2020 Weightlifting
Get the latest updates on ICC Women's Cricket World Cup 2022 and IPL 2022, check out the Schedule , Live Score and IPL Points Table. Like us on Facebook or follow us on Twitter for more sports updates. You can also download the NDTV Cricket app for Android or iOS.