Professional boxers would be allowed to compete in the Olympic Games in August in Rio de Janeiro provided the decision is ratified at the AIBA Extraordinary Congress on June 1 when the proposal would be put to vote. 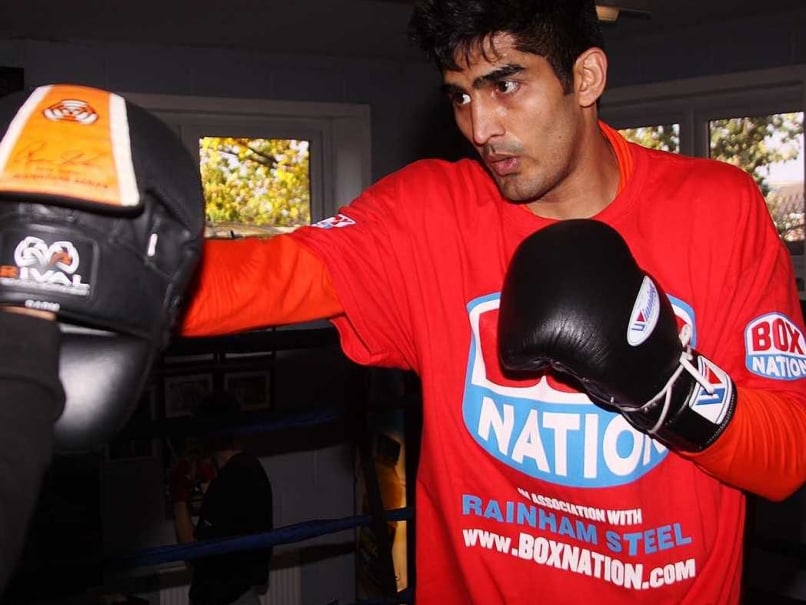 Vijender Singh will look to continue his unbeaten run when he faces Alexander Horvath of Hungary in his fourth career bout at Liverpool on March 12.© NDTV
New Delhi:

The International Boxing Association (AIBA) may have thrown the Olympic door open for professional boxers but it is unlikely that Indian star Vijender Singh will be taking up the opportunity even though he is keen for it. (Vijender Singh's Maiden Title Bout Tentatively Set For June 11)

Professional boxers would be allowed to compete in the Olympic Games in August in Rio de Janeiro provided the decision is ratified at the AIBA Extraordinary Congress on June 1 when the proposal would be put to vote. (Vijender to Face Hungary's Alexander Horvath)

The plan is to allow pro boxers qualify for Rio via the AIBA-affiliated World Series of Boxing (WSB) and AIBA Pro Boxing (APB) event. Both these events, originally scheduled for May, could be pushed back to last week of June to give national federations enough time to send their entries. (Manny Pacquiao - Philippines Next Olympic Medallist?)

"If given a chance, I would definitely try to qualify for the Olympics. Who would want to miss an opportunity if it is there," Vijneder told PTI from Manchester where he is training for his next pro fight on March 12 in Liverpool.

However, the question is whether there is any realistic opportunity for him to give it a shot.

The 30-year-old middleweight's schedule is booked till June 11 when he will make his pro debut in India by fighting for his maiden title - the WBO Asia belt.

That India does not even have a national federation as of now is also an important factor given that the nominations for boxers in WSB and APB will be left to respective national bodies. And if India fails to put together a federation by March 31, there is a real chance of the country's boxers being barred from the Olympics altogether.

Assuming that the situation would be resolved, what would be the scenario if India's middleweight slot is booked by any other boxer -- Vikas Krishan being a top contender -- in the Asian Olympic Qualifiers later this month.

It would be interesting to see if Vijender would be up for competing in any other category even if he were to make space for a WSB or APB appearance. Together, the WSB and APB have 26 Olympic quota places on offer.

Asked about these factors, Vijender said, "I don't have any clarity on this as of now. But let's see how things go. My stand is if there is an opportunity, I would try but if there is none, there is nothing that I can do."

"This decision to allow pro boxers in the Olympics is something that will have a bearing on 2020 Olympics because by that time the entire process would be clear. Right now, the Olympics is less than six months away, so I am not sure how AIBA would be able to put things together and ensure participation of top pro guys," he said.

Interestingly, top pro bodies such as the World Boxing Council (WBC) has already slammed AIBA for the move, saying that the amateur body seems to have no understanding of the difference in competition. Also critical of the move are former pro stars such as Barry McGuian, who has termed it "an absolutely bizarre idea".

Brig. Raja agreed with the assessment, saying that amateur and pro formats are way too different to coexist unless the technical officials from both sides are brought together.

"The scoring pattern is very different and so is the approach of the boxers. There are practical issues involved and they need time for resolution," he said.

Comments
Topics mentioned in this article
Boxing Olympics 2016 India
Get the latest updates on ICC T20 Worldcup 2022 and CWG 2022 check out the Schedule, Live Score and Medals Tally. Like us on Facebook or follow us on Twitter for more sports updates. You can also download the NDTV Cricket app for Android or iOS.