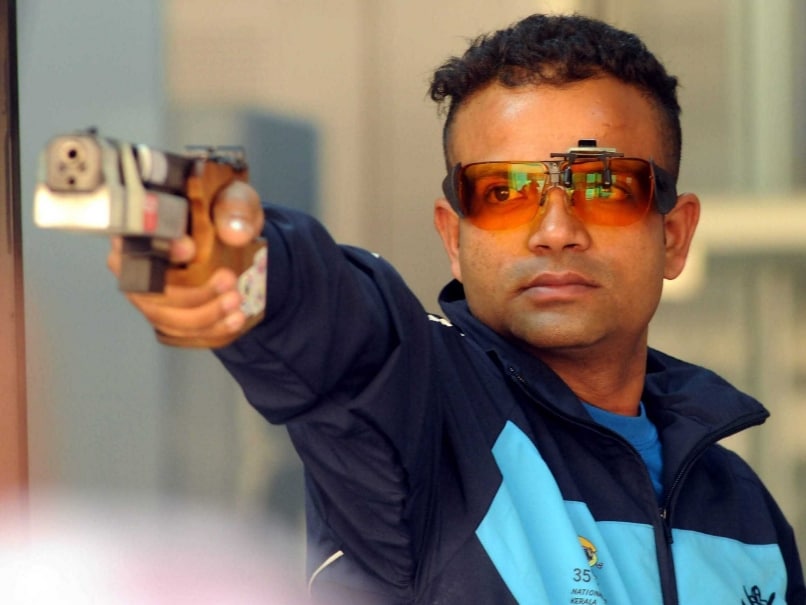 In the men's 25m Rapid Fire Pistol event on Day 2 of the Asian Olympic Shooting qualifiers in Delhi on Thursday, Vijay Kumar saw his dreams of securing a quota for Rio fade away after qualifying for the finals with a top score of 576.

In the six-man final, where he had to beat Qatari Oleg Engachev and one out of two Japanese shooters to ensure a quota, Vijay became the second shooter to be eliminated, finishing fifth.

The two quotas in the event were bagged by eventual gold medalist Teruyoshi Akiyama and bronze winner Eita Mori of Japan. Korea's Yong Hoo Choi clinched the silver. Korea could not claim quotas in this event as they had already exhausted them in earlier competitions.

Chenai registered the best day of his short Trap shooting career, when he beat all odds to finish fourth and secure one of the four available quotas for India. At the Dr Karni Singh Shooting Range, Kynan qualified for the six-man finals.

In the final rounds, Kynan tied with three others after the first 15 shots with a score of 12 to reach the semi-finals stage thereby assuring India the 10th Rio Olympics quota in shooting.

Kynan then had to settle for a bronze medal match-up with Kuwait's (now shooting as an international participant) Talal Al-Rashidi. Talal eventually piped him for the bronze medal having missed just one of his 15 shots while Kynan missed two.

Omkar Singh in the men's 50m Pistol is one of India's quota hopes on Day 3. All three women in the women's 10m Air Rifle event -- Pooja Ghatkar, Ayonika Paul and Elizabeth Susan Koshy - will also be looking to earn India spots in the Summer Olympics.

(This story has not been edited by NDTV staff and is auto-generated from a syndicated feed.)
Comments
Topics mentioned in this article
Vijay Kumar Shooting Olympics 2016 India
Get the latest updates on ICC Women's Cricket World Cup 2022 and IPL 2022, check out the Schedule , Live Score and IPL Points Table. Like us on Facebook or follow us on Twitter for more sports updates. You can also download the NDTV Cricket app for Android or iOS.