Usain Bolt's participation at the 2016 Rio Olympics is under doubt after the world's fastest man pulled out of the 100 metres final at the Jamaican National Championships due to a hamstring injury. 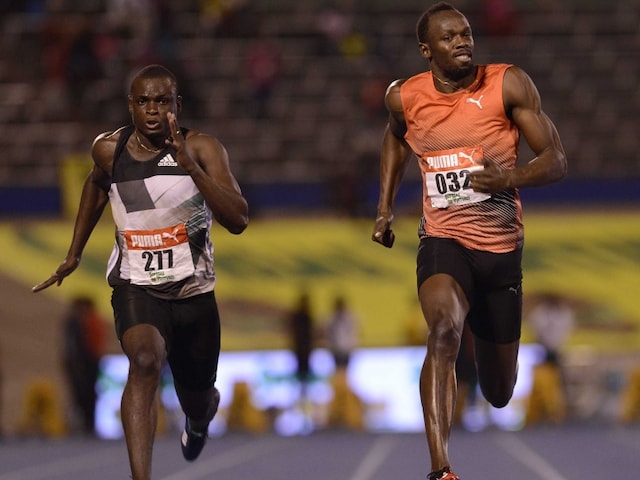 Warren Weir (L) tries to keep up with Usain Bolt (R) in the men's 100 metres semifinal at the National Stadium in Kingston on Friday.© AFP

Usain Bolt's Olympic quest is in doubt, after the sprint superstar left his country's national championships with a hamstring injury shortly before he was going to run the 100-metre final.

And that was just one part of a bizarre night at National Stadium.

Bolt's longtime rival Yohan Blake won the 100 title and formally qualified for the Rio de Janeiro Olympics - but only after a false-start disqualification call against him was overturned after review.

But even after Blake regrouped and prevailed, all the buzz was about Bolt and his status going forward especially since the national meet serves as the Jamaican Olympic trials.

He's not out of the Rio Games, but his status hinges now on how he does at a meet in London in three weeks. Bolt said he was diagnosed with a Grade 1 hamstring tear - the most mild sort - and that the discomfort began presenting itself in his quarterfinal race on Thursday night.

"I have submitted a medical exemption to be excused from the 100m final and the remainder of the National Championships," Bolt said in a statement released through Jamaican officials.

"I will seek treatment immediately and hope to show fitness at the London Anniversary Games on July 22 to earn selection for the Olympic Games in Rio."

Blake, who finished second to Bolt at the London Games in the 100, said he was confident that the world-record-holder will be in Rio.

Comments
Topics mentioned in this article
Usain Bolt Olympics 2016 Athletics
Get the latest Cricket news, check out the India cricket schedule, Cricket live score . Like us on Facebook or follow us on Twitter for more sports updates. You can also download the NDTV Cricket app for Android or iOS.