Devendro Singh Fails to Qualify For Olympics, Vikas And Manoj Settle For Bronze

L Devendro Singh failed to clinch an Olympics berth losing in the semi-finals of the AIBA qualifiers. Vikas Krishan and Manoj Kumar have qualified for 2016 Rio Olympics 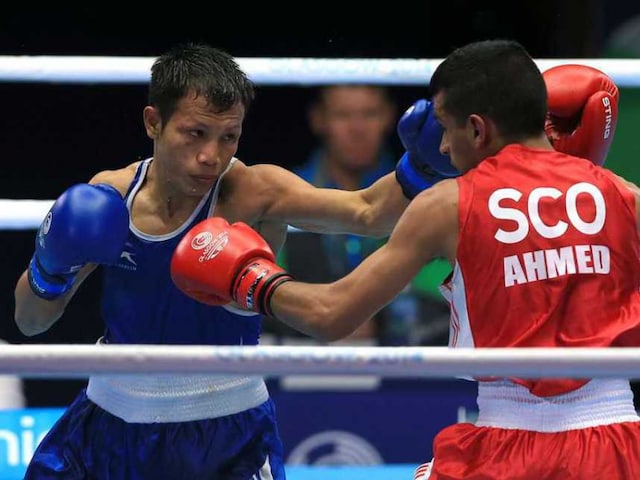 L Devendro Singh (left) failed to qualify in the 49kg category for the 2016 Rio Olympics.© AP

With only two quota spots available in the 49 kg, it was end of the road for the gutsy Manipuri as he lost 1-2 to Spaniard Carmona Heredia Samuel in a closely fought encounter.

"My boy gave his everything, he gave one of his best performance but could not get th judges nod. But he was brilliant," chief coach Gurbax Singh Sandhu told PTI after the bout.

Earlier, Vikas was declared medically unfit and had to concede his bout against Turkmenistan's Achilov Arslanbek while Manoj lost 0-3 to reigningÂ  European champion Pat McCormack of Britain.

Manoj was satisfied with his performance but also did not forget to mention that it was a lonely fight for him without any sponsorship or government help.

"I am very happy with how I have performed because I had no backing from anybody. I am not in the TOP scheme neither do I have a sponsor. I have only got the support of my elder brother Rajesh. I am Class III staff of Indian Railways. I have not been promoted despite my achievements but I am glad that I came this far without anybody's support," the pain was palpable in Manoj's voice.

In another disappointing news for India, Sumit Sangwan's (81kg) hopes of qualifying for the Olympics also ended today. Sumit, who lost to top seed Petr Khamukov of Russia in the quarterfinal last night, would have remained in contention had his opponent gone on to win the gold medal.

But the Russian chose to give a walkover in the semifinal, dashing Sumit's hopes.

Vikas sustained the cut last night during his quarterfinal contest against Korea's Lee Dongyun. The Indian triumphed 3-0 to make the semifinal and assure himself of an Olympic quota berth.

However, the injury he sustained required stitches on his forehead, which forced him out of today's semifinal clash.

"Vikas Krishan can't box today as he was declared medically unfit by the official doctors of the competition in the morning weigh in and medical examination because of stitches above his eyes," an official of the Indian team told PTI.

So far, three Indian boxers have qualified for the Olympic Games. Apart from Vikas and Manoj, Shiva Thapa (56kg) has also made the cut, booking his berth in the Asian Qualifiers in March.