Some Olympic Swimmers May Have Gotten an Unfair Advantage

In Rio, swimmers in the middle lanes were relatively unaffected. But on the lower-numbered side of the pool, competitors were about 0.4 seconds faster swimming away from the starting blocks 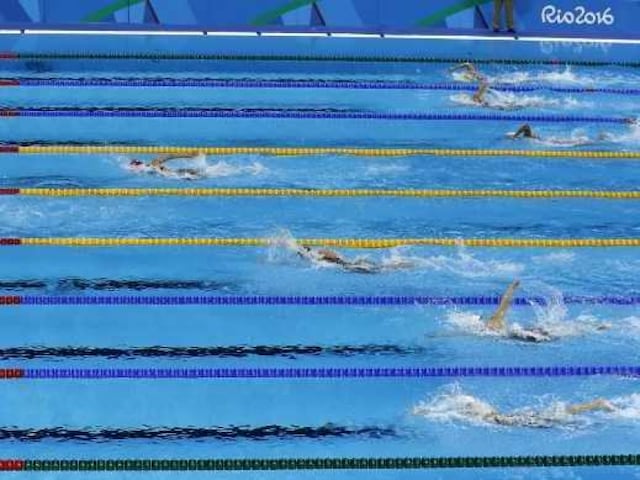 According to an analysis, swimmers raced faster when they moved to higher-numbered lanes.© AFP

A few years ago, researchers from Indiana University discovered a disturbing pattern at the 2013 Swimming World Championships in Barcelona. According to the lap-time data, athletes assigned to the outer lanes of the pool were consistently swimming faster in one direction than the other.

A mysterious force seemed to be interfering with the competition. But before the researchers could investigate in person, the pool - a temporary facility constructed just for that event - was torn down.

The same strange problem cropped up at the Rio Olympics, and nobody can explain why.

Indiana University researchers Andrew Cornett, Christopher Brammer and Joel Stager tracked the lap time discrepancies in the Rio pool using data from the longer-distance races. Since competitors in those events make several laps back and forth along the 50-meter-long pool, the researchers could compare swimmers against themselves.

In Rio, athletes in the middle lanes were relatively unaffected. But on the lower-numbered side of the pool, competitors were about 0.4 seconds faster swimming away from the starting blocks.

The higher-numbered side of the pool suffered from the opposite problem. Swimmers were about 0.2 seconds slower in their outgoing laps compared to their return laps. (In all of this, the researchers ignored the first and last laps because those are strategic parts of the race.)

To understand the pattern of lane bias, consider the example of Norwegian swimmer Henrik Christiansen. In his preliminary heat for the 1500-meter race, Christiansen was assigned to Lane 2. In that race, his outgoing laps were 0.28 seconds faster than his incoming laps, on average.

When Christiansen made it through to the final, he was assigned to the other side of the pool. In Lane 8, Christiansen swam a completely different race. His outgoing laps were slower than his incoming laps.

Could this have cost someone the gold?

Because most Olympic events require athletes to swim an even number of laps, the effects of any currents in the water should have somewhat canceled out. Those who got a boost swimming in one direction would have to fight the same force when they turned around.

The one exception is the 50-meter freestyle, which only covers a single length of the pool.

Barry Revzin, a data analyst based in Chicago who used to swim competitively at MIT, found compelling evidence of the lane effect by comparing swimmers' times as they rose through the heats and semi-finals. He took advantage of the fact that athletes were typically assigned different lanes as they progressed through the competition.

By Revzin's estimates, shifting two lanes to the right in the Rio pool would have given a swimmer a boost of about 1 centimeter per second. In a 50-meter freestyle race at Olympic pace, that translates to a difference of about one-tenth of a second.

As Revzin notes, this is a significant difference. In both the men's and the women's 50-meter freestyle, the top three finishers were separated by less than one-tenth of second. We'll never know for sure, but the evidence raises questions about what would have happened if people had gotten different lane assignments.

For instance, the women's bronze medalist, Belarus's Aliaksandra Herasimenia clocked 24.11 seconds. She beat out defending gold medalist Ranomi Kromowidjojo of the Netherlands, who clocked a 24.19. But Herasimenia swam in Lane 8, which the data suggest was the fastest lane. Kromowidjojo swam in Lane 3.

Revzin, who calls himself a "huge swimming fan," said he was deeply disappointed when he noticed the discrepancies.

"Sadness was the main emotion," he said. "This is not the kind of thing you want to see in the biggest competition in your sport," he said.

This is not an isolated event

Because swimming races can be won by fractions of a second, pools must meet fairly exacting standards. The International Swimming Federation, known as FINA, writes the rules. On matter of currents in the water, though, FINA is a little vague. The official regulations say that "in order to observe health regulations in force in most countries, inflow and outflow is permissible as long as no appreciable current or turbulence is created."

Both the pools in Rio and Barcelona were constructed by Myrtha Pools, an Italian company with extensive experience. According to a statement from FINA, Myrtha Pools told the officials that "no current was detected in the Olympic Aquatics Stadium pool, at any stage of the competitions."

The company did not respond to a request for comment, but two weeks ago, President Trevor Tiffany provided the swimming website SwimSwam with videos showing test objects floating motionlessly on the surface of the Rio pool.

"All I can say is we tested the pool both before the event and after Day 3 of the swimming with zero hint of a problem," he said, according to SwimSwam.

"This is a company with millions of dollars in assets and engineers and hydrologists, and they're going to float a jug?" Stager said. "I know this is not my area of expertise, but I know it's not as simple as dropping a plastic jug into the pool."

Tiffany also suggested that different breathing patterns may have affected the competition. In the outer lanes, people who breathe only to one side might have a harder time seeing the competition on odd or even laps. But that doesn't explain why these lane biases have only shown up intermittently, at certain swimming competitions, but not others.

In a recent study, Stager and his colleagues showed that lane bias has shown up before in major international competitions - typically in temporary pools like the one in Barcelona. The researchers believe that the construction process might make temporary pools more prone to currents.

It's also possible that the problem lies elsewhere. Timothy Wei, a professor of engineering at the University of Nebraska who has studied the fluid dynamics of competitive swimming, suggested recently that the problem may have to do with the rigidity of the pool walls.

Since temporary pools are typically constructed above ground, their walls might flex more and cause asymmetric waves that impede swimmers in the outside lanes, he explained in a phone call.

Right now, it's hard to predict when these irregularities will surface. There was no evidence of lane bias, for instance, in the temporary pool that Myrtha built for the 2015 FINA World Championships, according to Revzin's analysis.

But Revzin says the apparent lane bias at the Rio facility could have been caught earlier, because it was already evident in April, at an Olympic test event with Brazilian swimmers.

FINA notes that no one has found physical proof that implicates the Rio pool. The patterns documented by Revzin and the Indiana University researchers were "made on the basis of mathematical analysis, without taking into account any scientific evidence in the actual pool constructed for these Games," a FINA representative said in an e-mail.

Brammer, one of the Indiana University researchers, said that all he wants is for officials to take the problem seriously.

"It's affecting these athletes' lives," he said in a phone interview. "For some of them, this is their livelihood, and the Olympic Games are it. That's their pinnacle. For them to be cheated - that's a huge issue."

(This story has not been edited by NDTV staff and is auto-generated from a syndicated feed.)
Comments
Topics mentioned in this article
Swimming Olympics 2016
Get the latest Cricket news, check out the India cricket schedule, Cricket live score . Like us on Facebook or follow us on Twitter for more sports updates. You can also download the NDTV Cricket app for Android or iOS.