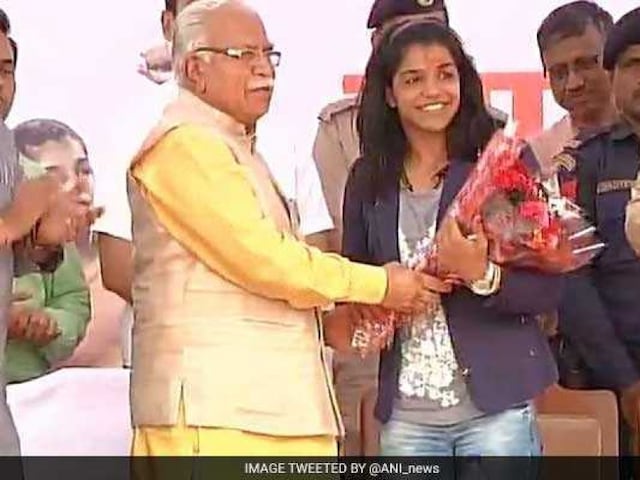 A grand state welcome was accorded by the Haryana government to the Olympic bronze medallist Sakshi Malik after she arrived on Wednesday from Rio.

Sakshi touched down in New Delhi in the early hours and was received by the ministers of the ruling Bharatiya Janata Party in Haryana.

Haryana's sports and youth affairs minister Anil Vij, who was present in Rio as head of state delegation, accompanied the wrestler on the return flight.

Sakshi then travelled to Bahadurgarh in Jhajjar district, where Haryana Chief Minister Manohar Lal Khattar along with his senior cabinet colleagues Abhimanyu and OP Dhankar, among others, welcomed the star athlete.

At the grand felicitation function in Bahadurgarh, Sakshi was handed a cheque of Rs 2.5 crore by the Chief Minister.

She was also appointed as Haryana's brand ambassador for 'Beti Padhao-Beti Bachao' programme.

"It is a proud moment for us that girls of the country have done so well. Our two daughters, Sakshi Malik and PV Sindhu (who won a silver medal at the Rio Games), have made the nation proud," Khattar said.

He said that sportspersons from Haryana have once again made the country and their state proud.

"Our government is taking a number of steps for the promotion of sports. Sakshi has made everyone proud including her country, her state, besides her coaches, her town Rohtak and her family," Khattar said in the presence of Sakshi's family members.

The CM said Sakshi, who is employed by the Railways, would soon be promoted.

"We have also offered her a Class II job in the Haryana government. She has said that she will think over it and decide," Khattar said.

On the occasion, Sakshi, in her brief speech, thanked everyone for their support and best wishes.

"I want everyone to support me in the future as well so that I can win more medals for my country," she said.

The 23-year-old was also honoured with a traditional 'pagri' at Bahadurgarh.

Sakshi, who opened India's medal account at the Rio Games, will make multiple stops before she reaches her native village, Mokhra, later in the day.

Khattar also announced to set up a Sports Nursery and Stadium for Sakshi's village -- Mokhra Khas, which is also known as 'pehalwan village'.

"We took a number of steps for the promotion of sports in the State. In future, we are going to recruit 1000 coaches so that at village and block level sports is encouraged," he said.

Attacking the previous governments, Khattar said stadia were constructed but adequate facilities were not given.

About BJP Government's Sports Policy, he said, "We have decided to catch them young. We will also set up a Sports University."

All the players from Haryana, who participated in the Rio Olympics, would also also be given Rs 15 lakh each.

Khattar said that the Haryana Government had decided to give Rs 6 crore to Olympic gold medal winner, an amount which is highest in the world.

Haryana is a state which is infamous for its skewed sex ratio and Sakshi today said upon her arrival at the airport that the girls should be given equal opportunities as boys.

"The girls should be given equal opportunities like boys to express their talent and make the country proud in their chosen field," she said.

Sakshi's father Sukhbir Malik became very emotional when he met his daughter and saw her medal while receiving her at the airport.

"I am proud of her achievements. In fact, not just me, the entire country is proud of her. She has made the country and her state proud. Her medal belongs to India," he said.

He also spoke about people telling him that wrestling was not a sport for the girls.

"Sometimes, some people used to say that she is a girl and this (wrestling) is not good for her. But in 2010, when my daughter won a medal in an event in Russia and later won an Asia Championship, then Commonwealth, everyone then wanted to be like Sakshi and emulate what she had done," Sukhbir said.

Meanwhile, last minute preparations are underway in Sakshi's village to give her a grand welcome.

A number of people have been flocking the wrestler's house to congratulate the family after Sakshi became the first Indian woman wrestler to win an Olympic medal.

Before she heads to her village, Sakshi will make brief stopovers at a couple of villages in Rohtak district, including Ismaila village, where she will meet her maternal uncle.

Village's elderly people told reporters that the entire country was proud of both Sakshi and Sindhu.

"The mindset that girls are less than boys has changed now. Girls are shining in all fields, be it sports or studies. They are equal and in some cases far ahead. I think we need to encourage girls and give them equal opportunities to realise their dreams and achieve their goals," a village elder said.

Accompanied by her mother and other family members, Sakshi travelled in an open bedecked vehicle, which had pictures of CM Khattar on one side with felicitation messages written for the bronze medallist.

Huge crowds had lined up at different places with garlands for Sakshi.

Some even put garlands of currency notes round her neck while others, mostly youngsters, clicked selfies with her. Sakshi was showered with flower petals and offered sweets.

People also danced to the beats of drums to welcome her.

At another halt, Sakshi, who was followed by a battery of mediapersons, was welcomed by school children who played the flute and drum for her.

Comments
Topics mentioned in this article
Wrestling Sakshi Malik Olympics 2016
Get the latest Cricket news, check out the India cricket schedule, Cricket live score . Like us on Facebook or follow us on Twitter for more sports updates. You can also download the NDTV Cricket app for Android or iOS.