Neeraj Goyat, Gaurav Bidhuri and Dilbag Singh will be aiming to put on a good show in the final qualifying tournament in Venezuela as they seek qualification for Rio Olympics 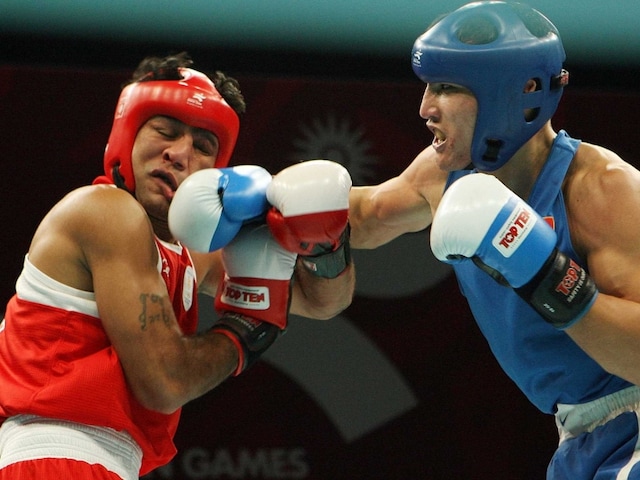 Aiming to become the first set of Indian professional boxers to compete in Olympics, WBC Asian title-holder Neeraj Goyat, Gaurav Bidhuri and Dilbag Singh will begin their campaign in the International Boxing Association's final qualifying tournament for the Rio Games in Vargas, Venezuela.

The event in Venezuela will mark a historic end to the dividing line between pros and amateurs.

Gaurav (52kg), Neeraj (69kg) and Dilbag (81kg) will all be in action tomorrow in the first round of the historic tournament, which was finalised after AIBA's Extraordinary Congress last month voted overwhelmingly in favour of allowing pros into the Olympics, scheduled in Rio de Janeiro from August 5.

The tournament will feature boxers from AIBA's own professional eventsÂ  -- the World Series of Boxing (WSB) and AIBA Pro Boxing (APB) -- besides pro boxers from all over the world.

However, none of the big names in the pro circuit have made themselves available for the tournament citing reasons ranging from fitness, lack of time for preparation and the threat of sanctions by their promoters and licensing bodies like the WBO and the IBA.

As per the official entries released by AIBA, 79 boxers from 40 nations will compete for the 26 quota places on offer in Vargas. All the three Indians in fray will have to either make the final or win the box off which will take place between losing semifinalists to be assured of Rio berths.

While Neeraj and Dilbag have been regulars on the WBC's pro circuit, making them eligible for this tournament, Gaurav has made the cut by virtue of his three stints in the WSB, where he won four and lost an equal number of bouts.