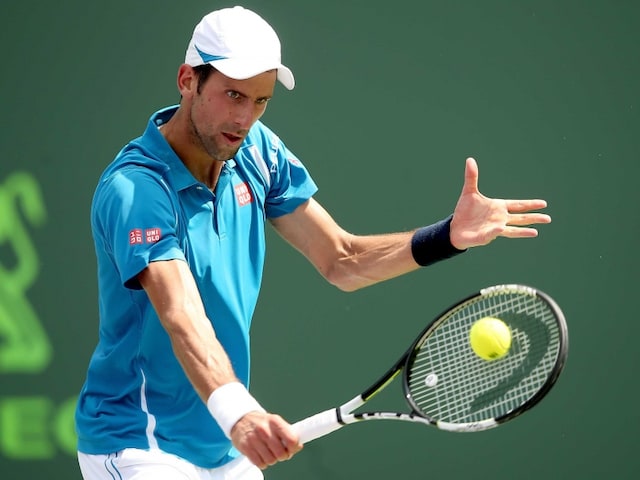 Novak Djokovic admitted Wednesday he was surprised that five of the world's top 10 had pulled out of Rio but insisted a first career gold medal would 'mean the world to me'.

The world number one can complete the Golden Slam of all four majors and the Olympic title if he wins in Rio having already completed the career Grand Slam by claiming the French Open in June.

The 29-year-old's path to the gold has already been eased by the withdrawals of top 10 players Roger Federer, Stan Wawrinka, Milos Raonic, Tomas Berdych and Dominic Thiem.

"To be honest, I was very surprised. I wasn't expecting to see that many pullout," said the Serb.

"They had their reasons and I have to respect that. But it's still a strong field -- myself, Andy Murray, Rafa Nadal, Kei Nishikori...these kind of guys.

"I am sure we will put on a great show."

Djokovic is playing in his third Olympics having won a bronze in Beijing in 2008 and falling disappointingly short of a medal in London four years ago.

"It's my number one goal. It would mean the world to me to crown my career with gold, it would rank as one of the highest achievements of my career," he said.

"It comes around every four years, it's a special event. I want to cherish and nurture it. I want to grasp this wonderful energy. It's a privilege to be here."

With his shock third round Wimbledon loss behind him and a 30th career Masters title secured with victory over Kei Nishikori in Toronto at the weekend, Djokovic says he is only looking to the future.

"What happened at Wimbledon is behind me," said Djokovic who suffered his earliest loss at a Slam in seven years.

"Roland Garros is behind me. To win the Grand Slam in Paris was an unforgettable experience, but it's passed.

"They were beautiful memories but I want to live in the present.

"Actually losing early at Wimbledon actually helped me to recover and rest. Everything happens for a reason. There must be an order to the universe for that to happen."

Meanwhile, the seeds for the Rio tennis tournament, which starts Saturday, were announced by the International Tennis Federation on Wednesday.

In the women's event, world number one and defending champion Serena Williams leads the way ahead of Angelique Kerber, Garbine Muguruza, Agnieszka Radwanska and Venus Williams.

Comments
Topics mentioned in this article
Olympics 2016 Novak Djokovic Stanislas Wawrinka Roger Federer Dominic Thiem Tomas Berdych Tennis
Get the latest Cricket news, check out the India cricket schedule, Cricket live score . Like us on Facebook or follow us on Twitter for more sports updates. You can also download the NDTV Cricket app for Android or iOS.