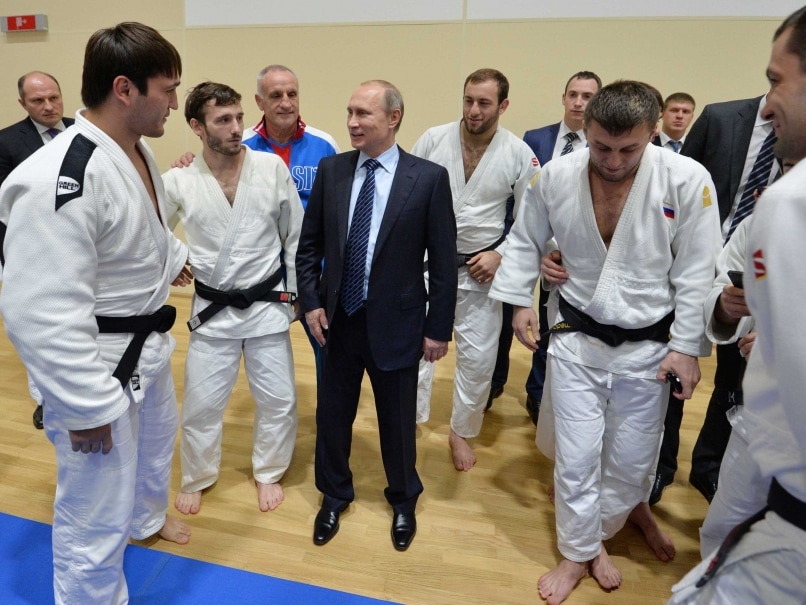 Russian president Vladimir Putin has often used sports to showcase his might.© AFP

Once again, the people who run the Olympics just can't say no to Vladimir Putin.

Not when he spends more than USD 50 billion to host a winter Olympics to show off a resurgent Russia. Not when he talks darkly about returning to the days of Olympics boycotts in 1980 and 1984.

Certainly not when he suggests that doping officials of one powerful country, can you guess which one? are behind efforts to ban Russia from the Rio Olympics.

When Putin talks, Olympic officials listen. And that's the biggest reason why Russian athletes at least some of them will march in opening ceremonies less than two weeks from now in Brazil.

With Russian prestige on the line, the executive board of the International Olympic Committee caved in. Instead of banning Russia from Rio for running a state-sanctioned doping operation, the IOC members decided instead Sunday to allow individual sports federations to decide which Russians can compete.

Spineless, yes, but that's to be expected. No reason to let a little doping scandal get in the way of a cozy relationship that serves both sides so well.

It was just a little more than two years ago that Putin was the face of a winter Olympics that he saw as far more than just a sporting event. He cheered Russian athletes in arenas and in the mountains, and celebrated with them as they added to the host country's medal haul.

Meanwhile, his agents were working late into the night at the Sochi doping lab, exchanging urine samples taken from the country's athletes for clean ones in an elaborate scheme to escape detection.

It paid off with 33 medals for Russia, 11 of them gold. The country led the medal standings, and Russian pride surged with every big win.

That much of it was a scam wouldn't be uncovered until many months later. When it was, it was clear the scope of the cheating effort was so great that it couldn't have been pulled off without cooperation and approval from the highest levels of the Russian government.

Yet Russian athletes will still compete in Rio. The official explanation for just why came from IOC President Thomas Bach, who said it would be unfair to ban all Russians when it has not been proven that all of them cheat.

"At the end of the day, we have to be able to look in the eye of the individual athletes concerned by this decision," Bach said. The unofficial explanation was more telling.

"The IOC decision was to be expected. You can't behave improperly toward a power like Russia," said Gennady Alyoshin, a Russian Olympic Committee official, in comments to the Tass news agency.

Apparently you can't, since the IOC for all its bluster about operating drug-free Olympics seems more worried about offending Russia than protecting clean athletes.

The inexplicable decision to allow Russians to compete in Rio is a slap in the face to both clean athletes and those around the world who work hard to try and ensure the playing field is level.

As an added insult, the IOC did Russia's bidding by refusing to allow Yulia Stepanova's entry into the games as a neutral competitor, a decision a top U.S. Anti-Doping Agency official called "incomprehensible." Stepanova is a runner who left Russia fearing for her safety after blowing the whistle on Russian doping and is considered a traitor by some in her home country.

It's enough to make even the true believers wonder. Just what are these Olympic ideals we hear so much about anyway? Surely there are some Russian athletes who don't cheat and would be banned unfairly from the games.

Hard to figure out who they are, though, with doping so widespread that Russian labs covered up more than 600 positive drug tests in 29 Olympic sports from 2011 until last August. So now you have swimmers who will have to wonder in Rio how they can beat a Russian in the next lane.

You have boxers who worry about getting hit in the face by a Russian opponent who just may be on the latest doping cocktail.

And you have incompetent Olympic leaders who talk grandly about cleaning up the games, then bow to Putin when given a chance to make the biggest statement ever about the evils of doping in sports.

Comments
Topics mentioned in this article
Olympics 2016 Olympics
Get the latest updates on India vs South Africa and check out  Schedule, Results and Live Score. Like us on Facebook or follow us on Twitter for more sports updates. You can also download the NDTV Cricket app for Android or iOS.