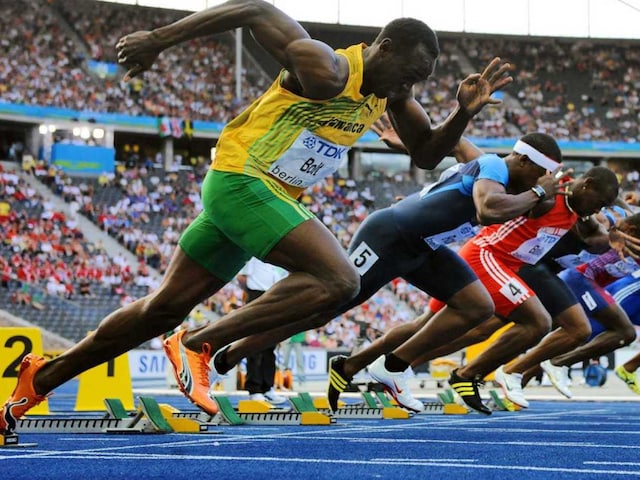 Usain Bolt injured himself in the Jamaican National Championships just ahead of the Rio Olympics.© AFP

Injured Usain Bolt will learn on Thursday if he will have his chance to run for a third consecutive Olympic gold medal in the 100 metres, 200m and 4x100 relay.

A Jamaican Athletics Administrative Association (JAAA) committee will meet on Thursday to consider Bolt's medical exemption request to be allowed to run in the 100 and 200 and on the relay -- all events he won at the 2008 Beijing and 2012 London Olympics.

Bolt said Friday after pulling out of the 100m final at the Jamaican Olympic Trials that he has suffered a slight hamstring tear, later posting photographs on social media of what appeared to be him receiving treatment on his left hamstring.

Reigning 100 and 200 world champion and world record-holder Bolt filed for the medical exemption that would allow him onto the Jamaican Olympic squad despite not competing in the trials.

Warren Blake, JAAA president, confirmed Saturday that Bolt had requested the exemption for the 100 and 200 after withdrawing.

JAAA rules allow injured athletes ranked in the top three on the IAAF performance list to miss the meet and be placed on the Olympic squad, but it requires the athlete prove fitness in time to be included on the Games list.

Blake and Ludlow Watts, team manager for Jamaica's athletics team for the Rio Olympics, said the selection committee would meet by Thursday to decide the list of athletes to represent Jamaica at the Rio Olympics.

Both men were hopeful that Bolt would be able to compete at the London Anniversary Games on July 22, the meet Bolt targeted as one where he needed to run well.

"He will run at the London meet on the 22nd and we hope he will get a good time there," Blake said.

Comments
Topics mentioned in this article
Olympics 2016 Usain Bolt Athletics
Get the latest Cricket news, check out the India cricket schedule, Cricket live score . Like us on Facebook or follow us on Twitter for more sports updates. You can also download the NDTV Cricket app for Android or iOS.