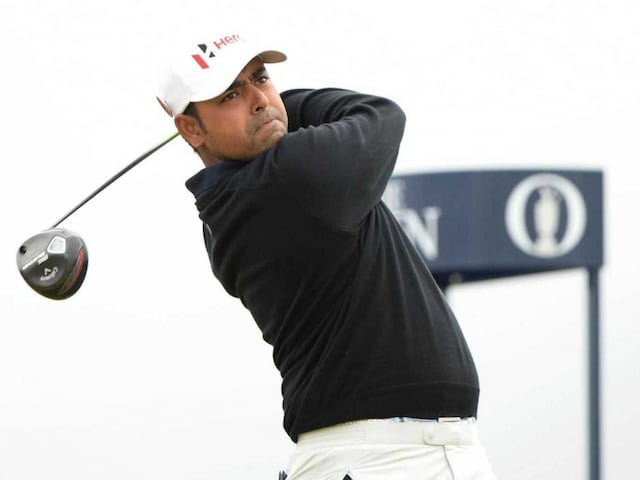 Anirban Lahiri has experience of playing against the best on the PGA Tour.© AFP

Reigning Asia No. 1 Anirban Lahiri and Indian Open winner SSP Chawrasia will carry the country's medal hopes when they tee off on Thursday as golf makes a return to Olympics after a gap of 112 years.

Two-time European tour winner Lahiri has been a revelation for Indian golf in the last couple of years as he clinched the Asian tour order of merit after winning twice --Maybank Malaysian Open and Hero Indian Open in 2015. He then produced a dramatic tied fifth finish at PGA Championships and went on to earn his card after just two of the four events on the Web Tour Finals.

After 20 events on the Tour this season, including all Majors and WGC events, Lahiri made the cut in all but four events and his experience of playing against the best in the business on the PGA tour will hold him in good stead as he eyes a medal at Rio Games. "The goal obviously will be to get there and try to get a medal or two, if both SSP (Chawrasia) and I can play well," said Lahiri, who has been clubbed with America's Bubba Watson and Germany's Martin Kaymer for the first two rounds.

"That should have a big impact on golf in India and Asia. It's going to make a big difference," said Lahiri, who was part of the Indian team that won the silver medal at the 2006 Doha Asian Games. Chawrasia, a winner of four international titles, including three on the European Tour, registered a long-awaited victory at the Indian Open earlier this year that propelled him into contention for the Olympics. Chawrasia will make a formidable pairing with Lahiri as both the golfers have been at the top of their game in the recent past.

"I feel it's an opportunity for me to give something back to the country. Not everyone gets a chance, I feel very lucky," said Chawrasia, who was clubbed with Ireland's Seamus Power and Chinese Taipei's Lin Wen-Tang. "Obviously, the field will be top class. But we know our strengths and Lahiri has been doing quite well. I'm focussing on my basics. Hopefully, we will make a mark," he added.

India will also be represented by 18-year-old Bengaluru girl Aditi Ashok, who in her rookie season as pro will compete in the women's event during the competition. Aditi became the first Indian to win the Lalla Aicha Tour School and secure her Ladies European Tour card for the 2016 season. This win also made her the youngest winner of a Q School for an international tour. The event will see 60 players in men's and women's section each at the Olympic Golf Course in Rio's Barra da Tijuca zone.

Many top golfers such as World No. 1 and 2 Jason Day and Jordan Spieth have withdrawn from the Games because of Zika virus concerns. Among other golfers Adam Scott, Louis Oosthuizen, Charl Schwartzel, Graeme McDowell, Vijay Singh and Rory McIlroy are some of the top names who all have declared their absence from the Games.

Comments
Topics mentioned in this article
Anirban Lahiri S.S.P. Chowrasia Olympics 2016 Olympics
Get the latest Cricket news, check out the India cricket schedule, Cricket live score . Like us on Facebook or follow us on Twitter for more sports updates. You can also download the NDTV Cricket app for Android or iOS.