South Africa's Caster Semenya should be celebrating her 800m gold at the Rio Olympic games. Instead, she faces the humiliation of her hyperandrogenism case being referred back to the Court of Arbitration of Sport because of IAAF's skepticism. It is an assumption that Semenya's physical condition is just like that of our very own athlete Dutee Chand. And the case that Dutee fought against discrimination has had a larger impact on all women athletes, including Caster 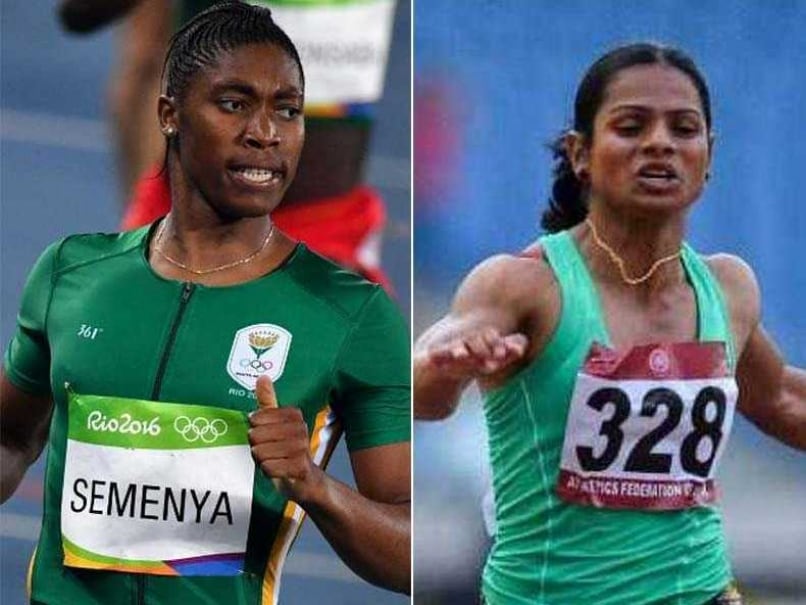 Will the IAAF and CAS stand united on the issue of athletes with hyperandrogenism?© NDTV

The Olympic movement abides by three values of Excellence, Friendship and Respect.

Caster Semenya's stupendous achievement on the penultimate day of the games deserves nothing short of respect. Because the athlete not just won the 800m gold- the ultimate symbol of grit and stamina- but also registered her personal best of 1:55:28, which is the fastest in the world this year. Niyonsaba took the silver in 1:56.49 and Margaret Wambui of Kenya the bronze in 1:56.89.

Their win has once again sparked the debate on women with hyperandrogenism in track and field sports. Infact, a couple of hours before the 800m final IAAF president Sebastian Coe reiterated that they will soon go back to CAS to try and overturn the decision on athletes with this condition. The IAAF has till July 2017 to appeal.

Last year the CAS arbitrators released a detailed 162-page decision that recognised not only the large volume of evidence presented by both sides but also the "complex legal, scientific, factual and ethical issues" at play. The court ruled that there was insufficient evidence that the performance advantage caused by hyperandrogenism was so substantial that it warranted excluding women with elevated testosterone from competing unless they take medication or undergo treatment to change their bodies.

The judgement enabled Dutee Chand to get back to the field and even qualify for the Rio games. Payoshni Mitra, a Gender and Sports Activist, who was a witness in Dutee's case says,"Last year, the CAS arbitrators released a very carefully analysed judgment. The CAS considered the rights of all athletes as set out in Olympic Charter and the IAAF Constitution and concluded that the Regulation was discriminatory. The CAS however, gave the IAAF two years within which they could provide fresh evidence.

"If IAAF go back to the court, Dutee Chand's legal team will get the opportunity to respond. Dutee was fortunate to have had James Bunting of Toronto and his team represent her pro bono at CAS. Dutee trusts her legal team and is therefore, focusing on training and performance. The Court of Arbitration of Sport has allowed her to run. And she must keep running!"

Such is the sentiment for Semenya as well. However, many including Sebastian Coe insist that Semenya should only compete if she takes hormone-suppressing drugs. And she did compete under those conditions in London four years ago, claiming silver. However after CAS' verdict, hormone regulators were not required during Rio2016.

Sceptics have been gunning for Semenya for long. Joanna Harper, a former trans athlete, had expressed concern that the podium in certain athletics events in Rio will be dominated by intersex women. Sadly while none of the other two medallists, Francine Niyonsaba and Kenya's Margaret Wambui have been identified as hyperandrogenic, they have been subject to the kind of aspersions cast on Semenya in 2009.

However some records prove that the competition has not been very unfair.

Semenya is the 11th fastest woman in 800m history, her's is not close to the World Record either.

But Semenya refused to be drawn into the debate once again. She said after her win on Saturday night, "It's all about loving one another. It's not about discriminating people. It's not about looking at people [and] how they look, how they speak, how they run. You know, it's not about being muscular. It's about sports. When you walk out of your apartment, you think about performing. You don't think about how your opponents look. You just want to do better. I think the advice to everybody is to go out and have fun."

Sure enough sports is for fun, sports is to unite as well. But will the IAAF and CAS stand united on the issue of athletes with hyperandrogenism? The jury is out on that.

Comments
Topics mentioned in this article
Olympics 2016 Olympics Olympics Olympics
Get the latest updates on SA vs IND 2021-22, check out the Schedule and Live Score . Like us on Facebook or follow us on Twitter for more sports updates. You can also download the NDTV Cricket app for Android or iOS.