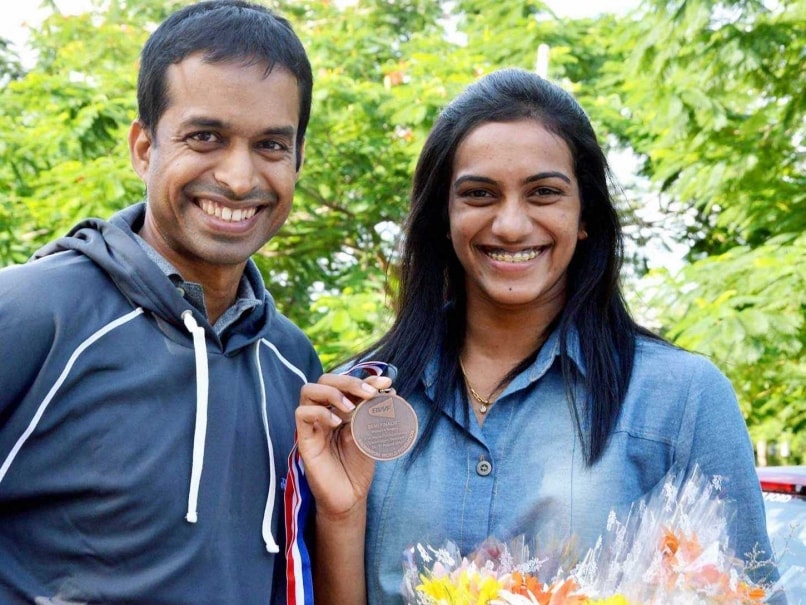 Gopichand is possibly the best badminton coach India has ever had.© PTI

Today, Indians across the world are celebrating the success of PV Sindhu. And why not? After all the 21-year-old has gone where no other Indian has ever treaded before.

She became the first Indian female Olympian to win silver in badminton. In 2012 London, Saina Nehwal had won the bronze medal playoff after her Chinese opponent Wang Xin retired to hand the Hyderabadi the metal.

Apart from the fact that they both hail from Hyderabad and are at the top of women's badminton, Saina and Sindhu share a common link -- Pullela Gopichand.

The chief national coach is more or less the sole reason why Indian badminton has transformed.

Today, India's stock in international badminton is undoubtedly high. It is seen as one of the top nations, at least when it comes singles, in the sport. And the reason behind the success is mainly the former All-England champion.

Gopichand, who is affectionately called 'Gopi Anna' by his proteges, was one of the better shuttlers in the world during his time as a player. But the 42-year-old is possibly and probably the best coach this country has ever had.

It was under Gopi that India won a bronze for the first ever time in the prestigious Uber Cup in 2014. Gopi was the reason behind Sindhu clinching two back-to-back medals at the 2013 and 2014 World Championships.

The rise of players like Kidambi Srikanth, HS Prannoy, Kashyap, Sameer and Saurabh Verma is all thanks to Gopichand whose dedication and passion for the sport and its improvement is second to none.

Talk to the players and they will provide testimony for the same.

A mere mention of 'Gopi Anna' in front of these players would bring nothing but the best of words from the vocabulary for their coach.

After Gopi retired as a player, he left a big gap to fill and there were hardly any shuttlers from India who would figure in the top-20 or 30 of the world.

It is not that things have started changing all of a sudden. Continentally, India was a major power with Prakash Padukone and the late Syed Modi. Then Gopichand carried the legacy of Trilok Nath Seth, Devinder Mohan Lal, Nandu Natekar and Dinesh Khanna, who have all made a splash on the international scene.

Those were the years (1950s-60s) when India looked good enough to be counted among the top badminton nations and overseas players regularly played on the Indian circuit.

But today, there are as many as five Indians (till recently there were eight) in the top-50 of men's singles rankings. Kashyap would have been No. 6 had he not been out of the circuit due to injury.

India also have two women's singles shuttlers who are regularly placed in the top-10 of the world's rankings.

Even though Saina is now coached by former Olympian and national champion Vimal Kumar, Gopichand's work that he put behind the 26-year-old cannot be forgotten.

It also must not be forgotten that it was under Gopi that Saina flourished and became the first Indian to win a Superseries title at the tender age of 19 in 2009 in Indonesia. And after that, laurels just started pouring in for India's star shuttler.

Gopi's aim is simple -- to make Indian badminton players challenge the best in the world. And they are already doing that.

A simple testimony to the Dronacharya awardee's dedication was given by Sindhu's father, PV Ramana, who said that they dedicate Sindhu's medal, irrespective of the colour, to Gopichand.