Jefinho, who could win a third consecutive Paralympic gold medal with Brazil's soccer 5-a-side team, has been dubbed the 'Paralympic Pele' for his success and playing style 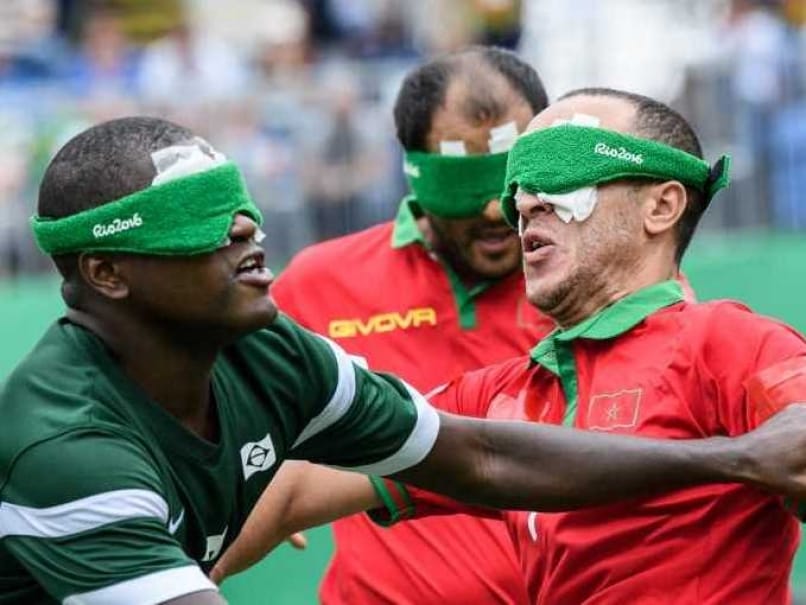 In soccer 5-a-side team, each competes with four blindfolded players and one goalie, who is not visually impaired.Â © AFP

Born with glaucoma, Jeferson da Conceicao Goncalves, known as "Jefinho," was completely blind by age 7, three years before he learned to play soccer. He had seen images of Pele but never watched videos of the legendary Brazilian soccer player in action.

Yet Jefinho, who could win a third consecutive Paralympic gold medal with Brazil's soccer 5-a-side team this week, has been dubbed the "Paralympic Pele" for his success and playing style.

"It's an honor for me to be compared to an athlete like Pele," said Jefinho, who, like others interviewed for this story, spoke through a translator.

Edson Arantes do Nascimento, known globally as "Pele", won three World Cup titles and was named the Athlete of the Century in 1999 by the International Olympic Committee.

"In the era that Pele played, he played really well," Tiago da Silva, Jefinho's teammate, said, "but if he puts the blindfold on, he's not going to play well."

In soccer 5-a-side, each team competes with four blindfolded players and one goalie, who is not visually impaired.

The field is smaller than a traditional soccer pitch and walled in so the ball cannot go out of bounds, and there are two 25-minute halves.

The ball makes a noise each time it moves. Coaches give their players verbal commands and clank metal against the goalposts in order to indicate which way their players need to go.

"He's a unique player who has already been considered to be the best player in the world," Fabio Vasconcelos, Brazil's soccer 5-a-side coach, said of Jefinho. "I did not see Pele play, but he was a phenomenal player. I don't know if you can compare both of them, but for me, Jefinho is a phenomenal soccer player."

Vasconcelos agreed that Pele wouldn't play as well with a blindfold on. However, Jefinho has faith in his counterpart.

"He gave us three World Cup titles. Even with just one leg, Pele would play really well," said Jefinho, 26, who joined Brazil's soccer 5-a-side team when he was 17.

He led Brazil to two back-to-back Paralympic gold medals at Beijing 2008 and London 2012. Brazil plays China in the Rio 2016 semifinals Thursday. The bronze- and gold-medal games are Saturday.

"He seems like he could actually see the ball and where the players are," Brazilian fan Fabiana da Silva dos Santos said of Jefinho. "He passes the ball just as if he was seeing everything."

Of several fans interviewed, only one had witnessed Pele in action: Jorge Germano da Silva, 65.

"Pele is something else," Da Silva said. "He played in a different level. You cannot make the comparison."

Said Vasconcelos: "They're two big stars -- it's great that they were born in Brazil."

Others watching Jefinho play this week at Olympic Park noted similarities in his playing style to globally renowned superstars.

"From the way that Jefinho controls the ball, we can compare it to the way that Messi does," said Rodrigo da Luz, 19. "He controls it really close to his feet and out-dribbles his opponents."

Jefinho is bringing his sport notoriety in Brazil.

Neiva Ananias started watching soccer 5-a-side based on the suggestion of her 8-year-old son. She was so intrigued that she went on the team's national website to see about future games and find out more information.

"People would call him (Jefinho) Neymar," Ananias, said in reference to fans' reactions.

Both Jefinho and Neymar, who connected on the penalty kick that gave Brazil the Olympic gold medal a month ago, have played for Brazil's national team approximately the same amount of time. But Jefinho has two gold medals compared to Neymar's one.

"They're almost the same," he said, "but Neymar is better."

This friendly debate is welcomed by Jefinho. However, he's set on making his own history in 5-a-side.

"This shows that people see me in a different way," Jefinho said. "To be a role model for other people to follow a path in sports -- I feel very proud about myself to do a job that gives this example to other people."