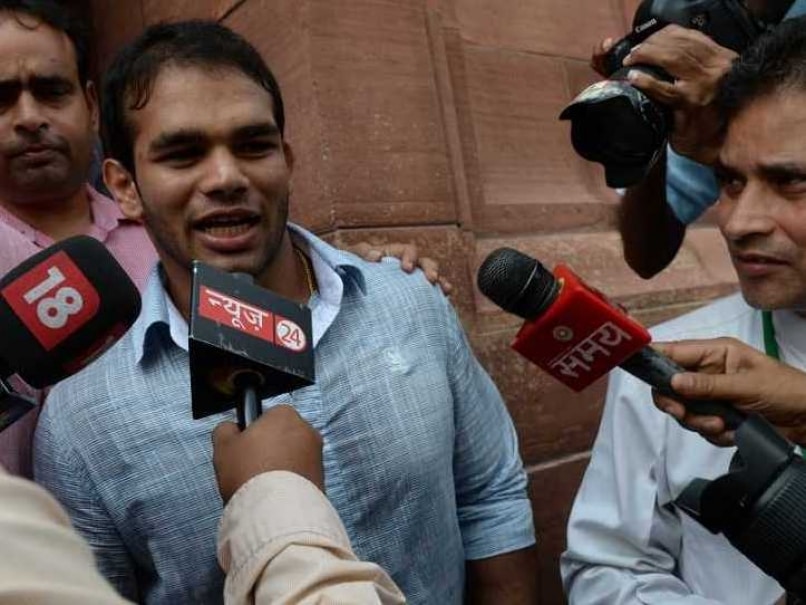 Narsingh Yadav has been banned for a period of four years.© AFP

Narsingh Yadav's dream of participating at the 2016 Rio Olympics and bringing home a medal came to a crashing end after the Court of Arbitration for Sport banned the Indian wrestler for a period of four years after the World Anti-Doping Agency appealed against his participation at the ongoing Games.

The grappler said he was devastated to the decision of CAS but will try to prove his innocence - something that he is only left to fight for.

"To say I am devastated at the decision of CAS would be putting it mildly. I have gone through so much over the last two months off the mat but the thought of fighting for the glory of the nation at the Games had kept me going. My dream of competing and winning the country a medal at the Rio Olympics has been cruelly snatched away from me twelve hours before my first bout," Narsingh, who was to fight in men's 74kg category, said.

"But I will do everything it takes to prove my innocence. It is all I have left to fight for," he said in a statement issued by his sponsors JSW Sports.

The statement said that a review of the decision could be filed if further evidence is found pertaining to the claim of sabotage made by Narsingh.

"We will be pressing for a review of the decision that WADA would be amenable to if further evidence is found pertaining to sabotage," it said.

"JSW Sports strongly believes in Narsingh's innocence and will stand by the wrestler in doing everything to fight for justice," it added.

The World Anti-Doping Agency (WADA) had appealed against the NADA all-clear to Narsingh at the ad hoc division of the CAS at Rio, three days ahead of his scheduled opening bout at the Olympics.

"...the parties were informed that the application was upheld, that Narsingh Yadav was sanctioned with a four-year ineligibility period starting today and that any period of provisional suspension or ineligibility effectively served by the athlete before the entry into force of this award shall be credited against the total period of ineligibility to be served," CAS said in a statement after the hearing, which lasted four hours last night.

"Furthermore, all competitive results obtained by Narsingh Yadav from and including 25 June 2016 shall be disqualified, with all resulting consequences (including forfeiture of medals, points and prizes). The CAS Panel did not accept the argument of the athlete that he was the victim of sabotage and noted that there was no evidence that he bore no fault, nor that the anti-doping rule violation was not intentional. Therefore the standard 4-year period of ineligibility was imposed by the Panel," it added.

The verdict marked a painful end to the sordid controversy which began with the wrestler failing a June 25 test.

The 27-year-old's name had appeared in the official Olympic schedule after he underwent the mandatory weigh-in. He was to take on France's Zelimkhan Khadjiev in the qualification round but the CAS verdict has dashed all his hopes.

The embattled 74kg category grappler has maintained all along that his scandalous dope test was a result of conspiracy by rivals who spiked his food or drinks.

"WADA filed an urgent application before the CAS ad hoc Division to challenge the decision of NADA India to exonerate Narsingh Yadav following two positive anti-doping tests with methandienone on 25 June and 5 July 2016. The athlete asserted that he was the victim of sabotage (food/drink tampering) by another person. WADA requested that a 4-year period of ineligibility be imposed on the athlete," the CAS further noted.

Comments
Topics mentioned in this article
Olympics 2016 Wrestling Olympics Olympics Olympics
Get the latest updates on Olympics 2020, Olympics 2020 Medal Tally, Live Cricket Score . Like us on Facebook or follow us on Twitter for more sports updates. You can also download the NDTV Cricket app for Android or iOS.