Indian men started their Rio Olympics 2016 hockey campaign with a narrow 3-2 win over Ireland on Saturday thanks Rupinder Pal Singh's brace. Ranked No. 5 in the world, India finished last in London 2012. Catch all highlights of India vs Ireland here.

India had a jinx to break in Rio Olympics 2016. Interestingly, Indian men had not won their opening match of an Olympic competition after Sydney 2000. But PR Sreejesh's India changed that with a 3-2 victory over Ireland. Catch all the highlights of India vs Ireland here. (MEDAL TALLY | INDIA AT RIO TODAY | NEWS)

21:17 hrs IST: Hope you enjoyed our coverage. Also join us for live shooting blog as Jitu Rai and Gurpreet Singh will be seen in action in some time.

21:13 hrs IST:Â India's first win in an Olympic hockey match after 12 years. All goals came from short corners. India's next match is against defending champions Germany

21:06 hrs IST:Â Two minutes left on the clock. Ireland withdraw their goalie and have 11 attackers on the pitch. Desperation?

20:48 hrs IST:Â Rupinder Pal makes it 3-1. Another fantastic and pin-point finish to goalie's right. It is Rupinder's second goal of the match

GOOAALL! @rupinderbob3 is on fire! He scores his second goal of the game with another stunning PC goal!
IND 3-1 IRL.#Hockey #Rio2016

20:44 hrs IST:Â The last quarter starts and India look very keen to build on their 2-1 lead. India on the attack straight away. Good approach

20:39 hrs IST:Â India concede a penalty corner to Ireland due to Raghunath. Two minutes to goÂ

20:38 hrs IST:Â India down to 10 men in the last couple of minutes after Uthappa's green car

20:37 hrs IST:Â Akashdeep Singh with a fine solo run down the centre but Irish defence do well to thwart the attack. Three minutes left in third quarter

20:35 hrs IST:Â India hold on to their 2-0 lead with four minutes left in third quarter.

20:31 hrs IST:Â Ireland win their fourth penalty corner in the sixth minute of third quarter and waste it again

20:30 hrs IST:Â India have converted two of their six penalty corners. Ireland have wasted all their threÂ

20:29 hrs IST:Â India attacking a lot through the flanks

20:27 hrs IST:Â Sardar Singh has been a livewire in the field today. The former skipper is really putting a lot of pace in his display today

20:22 hrs IST:Â Action about to start after half-time. India have to hold on to their lead. Ireland have shown the propensity to attack with long balls. Interesting 30 minutes coming up

HT! India begin their #MedalKaMission in style with some breathtaking #Hockey in the 1st half!
IND 2-0 IRL#Rio2016 pic.twitter.com/EPpzIq2lXv

20:19 hrs IST: Meanwhile the first gold of 2016 Rio Olympics has gone to Virginia Thrasher who won the women's 10m air rifle event earlier in the day.

20:14 hrs IST:Â India waste the penalty corner and it's the end of the second quarter. India lead on goals by Raghunath (15th) and Rupinder Pal (27th).

20:13 hrs IST:Â India win their sixth penalty corner with three minutes left for first half. Will it be 3-0?

20:06 hrs IST: Off a counterattack, India win their first penalty corner of this quarter. Four minutes to go

20:05 hrs IST:Â Defender Conor Harte fires it wide and India cling on to their 1-0 lead

19:54 hrs IST:Â The second quarter gets under way and Ireland on the offensive straightaway

19:51 hrs IST:Â Yes, Raghunath scores with a superb placement to the goalie's right. India 1 Ireland 0 at the end of first quarter

19:49 hrs IST:Â India waste this too but force a third one

19:48 hrs IST:Â India win their second penalty corner thanks to a video referral. Just a few second left for the quarter to end but India in no hurry

19:44 hrs IST:Â A good move by SK Uthappa with a sizzling move down the left flank but good defending by the Irish

19:42 hrs IST:Â India are putting a lot of pressure but no proper shots at goal so far. The game has been quite scrappy so far

19:35 hrs IST: Good move there by Harmanpreet. India are more or less playing in the Irish half

19:34 hrs IST: Here are the line-ups. PR Sreejesh will be leading the Indian team at RioÂ

A look at how the Men in Blue lineup vs Ireland in their first clash at #Rio2016, LIVE on Star Sports & DD1! #Hockey pic.twitter.com/AhEFGNjuCp

19:31 hrs IST: India have been placed in Group B along with Argentina, Canada, Germany, Ireland and Netherlands

19:30 hrs IST: The national anthems are being sung at the Olympic Hockey Centre

19:25 hrs IST: India were the first team to qualify for the Rio Olympics when they beat Pakistan in the 2014 Asian Games final

19:20 hrs IST: India take on Ireland in their opening match of the tournament

19:15 hrs IST: Hello people and hockey lovers! Welcome to the live blog of India's first match of the Rio Olympics 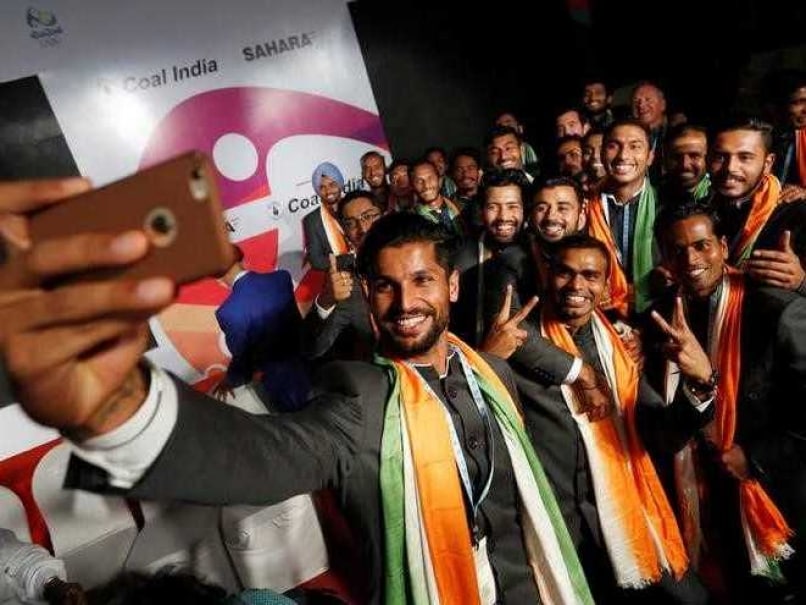 Indian hockey team members, who will participate in the Rio Olympics, pose for a selfie.

With a 4-1-1 win-draw-loss against Ireland, India, world No. 5, will start hot favourites against the Irish. But after beating Argentina 3-0 at the Sydney Games in 2000, India have been poor starters.

History, reputation and form goes for a toss at any big international meet and competing in an Olympics is the ultimate challenge for an athlete and country. India, therefore, will take nothing for granted against the Irish. India beat them 2-1 in their last encounter.

"The Irish can be unpredictable. They have been doing well in the European Championships and are sturdy and fast on the ball. It won't be an easy game to win and we will need to go full force," said Sreejesh.

Eight-time Olympic champions India are in a difficult group. After Ireland, they will play Germany (Aug. 8), Argentina (Aug. 9), Netherlands (Aug. 11) and Canada (Aug. 12) and all matches will be tough. But this Indian team has shown the ability to take the bull by the horns in recent times.

The Champions Trophy silver in London, after a close and controversial final against world champions Australia, will give India a lot of self-belief. India's ability to find a match-winner and not rely on a few players have been a striking improvement under Dutch coach Roelant Oltmans.

Selfie and the fun times over, India will now have to focus on their hockey in a bid to heal the deep scars of London 2012 where they finished last. Sreejesh will remember that horrible campaign.

Comments
Topics mentioned in this article
Hockey India Olympics 2016 Live Blogs
Get the latest Cricket news, check out the India cricket schedule, Cricket live score . Like us on Facebook or follow us on Twitter for more sports updates. You can also download the NDTV Cricket app for Android or iOS.