While Lalita Babar has already made it to the Rio Olympics in both 3000m steeplechase and marathon, Sudha Singh became the first one to qualify from the National Athletics Championships. 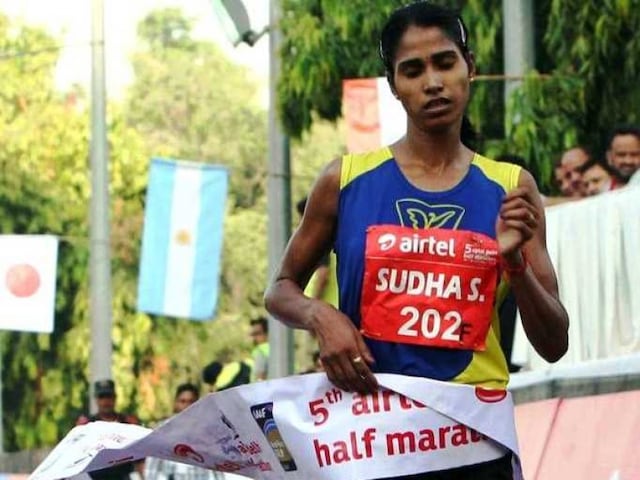 Sudha Singh became the first from the national athletics championships to qualify for the Rio Olympics.© NDTV

Olympics-bound Lalita Babar on Friday smashed her own national record to win the gold while Sudha Singh also qualified for the Rio Games while winning silver in women's 3000m steeplechase on the second and penultimate day of the Federation Cup National Athletics Championships in New Delhi.

Rajiv Arokiya set the second national record of the day while winning the gold in men's 400m race with a time of 45.47secs, missing the Rio Olympics qualification standard of 45.40secs by 0.7secs at the Jawaharlal Nehru Stadium.

Sudha's was the first Olympic qualifying effort in the Championships. Two national records were created on the first day yesterday with Dutee Chand (women's 100m) and Amiya Kumar Mallick (men's 100m), both from Odisha, clocking 11.33secs and 10.26secs respectively, though both could not make the Rio cut.

Maharashtra's Babar, who has already qualified for the Olympics in both the 3000m steeplechase and marathon, clocked 9:27.09 to win the gold and set the national record in world leading time while Sudha, representing Uttar Pradesh, came up with a timing of 9:31.86 and bettered the Rio Games qualification standard of 9:45.00.

The performance of Asian champion Babar, who finished eighth in 3000m steeplechase in the World Championships last year, was also remarkable as she recorded the world leading time though it is very early in the season.

For Sudha, it was a make or break race to make it to the Rio Games in 3000m steeplechase, and emotion took over her as she expressed relief of booking a Rio berth under pressure.

"There was pressure on me as it was my make or break race. I want to compete in 3000m steeplechase in Olympics but since I was not competing in this event since 2014 Asian Games, I am not getting any events outside the country. So I have no chance to qualify for Rio in 3000m steeplechase except running in domestic meets," she told reporters after the race.

"I am relieved now that I have qualified and I hope to run in international events in the run-up to Rio Games," she added.

It is learnt that within minutes of Sudha qualifying for Rio Games, AFI Secretary C K Valson sent an e-mail to Shanghai Diamond League organisers to allow Sudha to compete in the prestigious event to be held there on May 14.

"When you send your entry for an international meet, the organisers would ask for timings of recent races but Sudha does not have any for the last one and half years as she was running only marathon. So she can't take part in international events. Now that she has qualified for Rio and she has got a good timing, I have sent a request to Shanghai Diamond League organisers for her entry," Valso told PTI.

Meanwhile, Arokiya of Tamil Nadu ran the best ever 400m race in India by an Indian by clocking 45.47secs to beat young Mohammad Anas Yahiya (45.74s) of Kerala. The earlier national record of 45.48secs was in the name of K M Binu of Kerala, set in 2004 Athens Olympics.

In women's discus throw, 2010 Commonwealth Games gold medallist Krishna Poonia, who was returning to top-flight competition after a long injury lay-off, won the gold with an effort of 55.09m. Poonia's Haryana state-mate Sandeep Kumari bagged the silver with a throw of 54.93m while Navjeet Kaur Dhillon (53.65m) of ONGC took the bronze.

In men's long jump, Kumaravel Premkumar (Railways) won the gold by clearing a distance of 7.88m while Ankit Sharma (Haryana) took the silver in 7.76m. Karnataka's Samsheer finished a close third with a 7.62m leap.

The was a small glitch also as light went off for a few 10 minutes, during the men's hammer throw competition held at the training area, outside the main stadium. The competition was stopped for a while and resumed after around five minutes with the restoration of the electricity.