Jiya, who would accompany Devendra Jhajaria to training in Rajasthan, struck a deal with her father that if she topped in the lower kindergarten exam, he would have to win a gold in Rio Paralympics 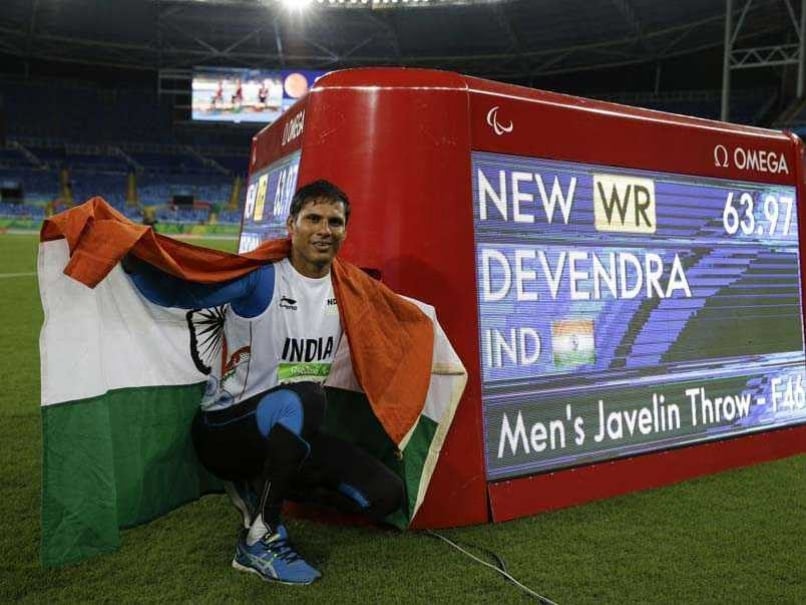 Javelin thrower Devendra Jhajharia has revealed that a "deal" with his six-year-old daughter propelled him to win a record second gold medal in the Paralympics.

Jiya, who would accompany Jhajaria to training in Rajasthan, struck a deal with her father that if she topped in the lower kindergarten exam, he would have to win a gold in Paralympics.

"She proudly phoned me to announce that 'I've topped, now it's your turn', something that kept on echoing in my ear when I entered the field at the Olympic Stadium," Jhajaria, the only Indian to win two gold medals in Paralympics, told PTI from Rio after winning the men's F46 javelin throw.

"She would be the happiest person. I will wait for her to wake up and speak to her," he said after breaking his own world record that he set in Athens in 2004.

Devendra in fact stayed awake whole night and kept talking to his family and well wishers till 5am in Rio.

Devendra's world record throw of 63.97 metres came in his third attempt as it bettered his own mark of 62.15m that he had produced for his maiden gold at the Athens Paralympics in 2004.

It was a long wait for the the 35-year-old, who did not feature in the previous two Paralympics with the event missing from the Games program.

Devendra falls under F46 classification which denotes F for field events and the number 45-47 is for "upper limb(s) deficiency, impaired muscle power or impaired range of movement".

To keep himself in shape and injury free during this period, the Indian followed an intensive training as he rarely visited home, a small village in Churu district of Rajasthan. So much so that his two-year-old son Kavyan does not even recognise his father.

"He does not even know what a father is like. Only his mom tells him by showing my photo, that it's papa. Hopefully I would be able to spend some time with them now."

Before Paralympics, he trained from April-July in Kuortane, Finland, where he became friends with Kenyan thrower Julius Yego, whom he calls one of his biggest motivators.

"He (Yego) would tell me his story of penury, of how he slept on a broken cot and how he learnt javelin throw by watching YouTube... It was quite an inspiration. If he can achieve after so much of hardships, why can't I.

"We would train for about seven hours. He would tell me I would surely win a gold in Rio. He went on to win a silver. I will speak to him soon as he has been a strong force behind my success," Devendra said.

"Since my childhood days, my mother kept me focused and told me you concentrate on your sport rest 'we will look after'. She would not even phone me thinking that I would get disturbed all these days. She has so far kept on fulfilling my need but never took anything in return.

"My wife on the other hand left kabaddi so that she can take care of the family as I mostly stayed away. My father ensured that I get the farm fresh lentils and wheat even when I'm away."

Devendra also thanked his personal coach Sunil Tanwar a SAI, Hisar coach for helping him, especially in overcoming a shoulder injury ahead of the Paralympics

"There were some special Theraband (resistance bands) exercises that really helped in strengthening my muscle. My success is incomplete without them."

When he was about eight years old, his left hand had to be amputated immediately after he accidentally touched a live cable entwined in a branch of tree he had climbed.

Many thought he was "dead" but the life of the son of a farmer's couple changed forever as ostracism had left him more determined.

He initially practised with bamboo-made javelin and competed alongside able-bodied athletes during a Railways trial.

"The normal kids did not want to play with me so I took up sport and decided to do better than them," he said.

His first major international medal was at the Far East and South Pacific Games for the Disabled in Korea in 2002 and since then he has not looked back winning Paralympic gold, IPC World Championship gold (Lyon 2013) and silver (Doha 2015) and Asian Para Games silver (Incheon 2014).

Post-Athens glory he was awarded the Arjuna and he became the only para-athlete to win the Padma Shri in 2014.

Devendra, who was included in the Target Olympic Podium scheme, further said the government and the Sports Authority of India gave him full support along the way.

But his only regret was the common people hardly took any interest in para-athlete's achievements.

Devendra is also supported by the GoSports Foundation, a non-profit venture that provided him the expensive equipment for his training.

"Javelins keep on breaking and are very expensive. I used six of them and many of which were provided by GoSports."

What next for Devendra?

"I will consult my coach (Tanwar Sir) and take a call. It's payback time for me and I want to do something that will help my country. I've not thought about coaching yet."

Devendra will leave for India on September 19.

Comments
Topics mentioned in this article
Olympics 2016 Olympics Olympics
Get the latest updates on IPL Auction 2023 and check out  IPL 2023 and Live Cricket Score. Like us on Facebook or follow us on Twitter for more sports updates. You can also download the NDTV Cricket app for Android or iOS.