Cate Campbell of Australia smashed the 100m freestyle swimming world record, which was set by Britta Steffen in 2009 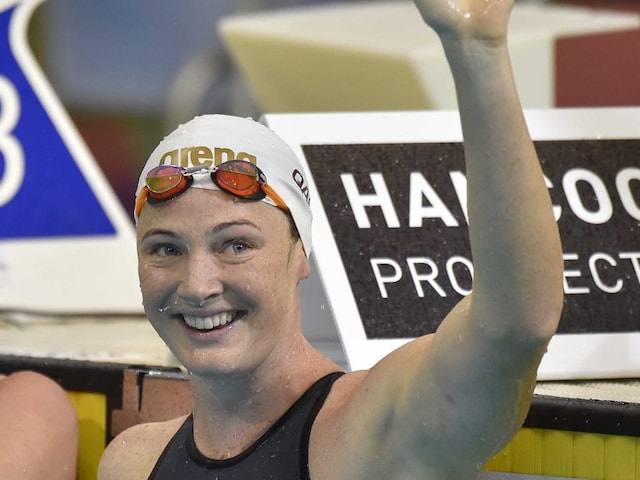 Australia's Cate Campbell smashed the long-standing women's 100m freestyle world record on Saturday at a meet in Brisbane in an ominous warning to her rivals ahead of the Rio Olympics.

The Australian Swim Team tweeted the world record, confirming the 52.06 seconds swim which eclipsed German Britta Steffen's old mark of 52.07 set in Rome in 2009 during the full-body supersuit era.

Ladies and gentlemen we present your new WORLD RECORD holder in the 100free @catecamp in 52.06 #racetorio pic.twitter.com/QGRtVqbu21

.@catecamp has put the world on notice with an incredible WR & @our_dawn was poolside for the historic race! pic.twitter.com/a8Xrg45ems

Campbell, 24, had "put the world on notice" at the Brisbane Grand Prix, it added, with Australian swim great Dawn Fraser poolside to witness the new record.

She had already notched an impressive win over her sister Bronte, the reigning world 100m freestyle champion, in the 50m freestyle on Friday.

"I still can't believe it's happened," Campbell told reporters after her win.

"People have been asking me when I was going to break the world record for the last three years and honestly it wasn't really on my mind but every time I got in the pool, it was like will they stop asking me this question now. Now you will."

In April, Cate had edged her sister to win an epic 100 metres freestyle final at the Australian Championships and Olympic trials in Adelaide.

A strong showing in Brazil would be a major turnaround for the squad, which produced just one gold at the 2012 London Olympics in a campaign marred by ill-discipline, drug use and drunkenness.