Kolkata-born Margaret Ives Abbott had not only taken part at the 1900 Paris Olympics, but inconspicuously went on to win the gold medal as well. Her incredible story had quite a few interesting twists 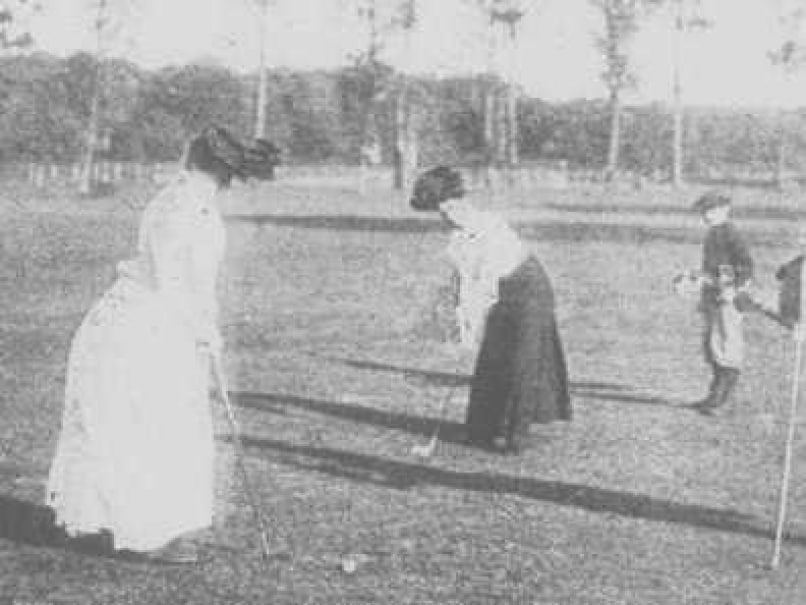 A still from the women's golf event at the 1900 Olympics.© NDTV

Once described by Sir Winston Churchill as "a game whose aim is to hit a very small ball into an ever smaller hole, with weapons singularly ill-designed for the purpose", golf had appeared at the 1904 St Louis Olympics before going into oblivion from the 'Greatest Show on Earth'.

Incidentally, the club sport had made its debut at the 1900 Paris Olympics when the historic quadrennial event went out of the Greek soil for the first time.

With golf making a comeback to the Olympics in Rio after a gap of over 100 years, two golfers with Bengal connection, Anirban Lahiri and Shiv Shankar Prasad Chawrasia, will tee off for India this evening. This, believe it or not, will complete a full circle in the history of golf at the Olympics.

Although Kolkata-born Anglo-Indian, double silver medallist (in 200m sprint & 200m hurdles) Norman Pritchard, who later had pursued a career in Hollywood, is considered as the first Indian individual Olympic medal winner, while for the first-ever official individual gold, the country had to painstakingly wait for 112-long-years until Abhinav Bindra hit the bull's eye in Beijing.

But there was an India-born Olympic gold medallist over a century before Bindra shot to golden glory. Kolkata-born Margaret Ives Abbott (born in 1878) had not only taken part at the Paris Games but inconspicuously went on to win the Olympic gold medal as well. But there are quite a few interesting twists to the incredible story. 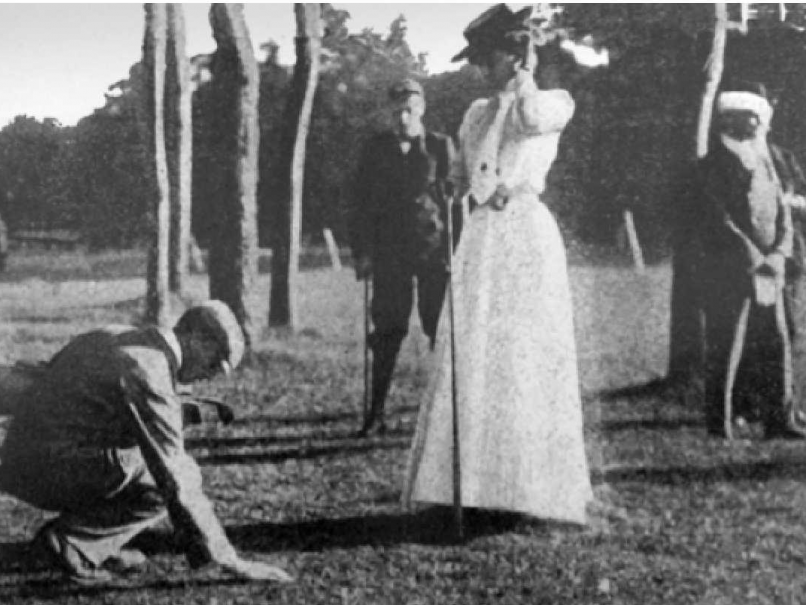 Margaret Abbott during her gold medal winning performance at the 1900 Olympics.

Abbott's father Charles Abbott was an affluent merchant in Kolkata, the then capital of British-ruled India while her mother Mary Abbott was an accomplished author from America.

But after Charles' death, Mary had shifted back to her native country, alongside her young daughter, Margret, and became a prominent literary editor for The Chicago Tribune and later The Chicago Times-Herald in the 'windy city'.

Soon after they migrated to the US, the young girl was baptised to the game of golf at the local Chicago Golf Club in Wheaton, Illinois, in 1897 and was mentored by two of the American amateur stalwarts from the city, Charles Blair MacDonald and HJ Whigham.

Soon she became a prolific player on the green and went on to win a slew of local events to become the talk of the town. Tall for her generation, Abbott was 5 ft. 11 inches and was known to have a "classy backswing".

But two years later, the versatile girl left the shores of the USA to study art & sculpture under the mentorship of renowned artists Edgar Degas and Auguste Rodin in Paris - the epicentre of art nouveau at its pinnacle.

A year later, while she was honing her artistic skills in the city of light, the Games were being sporadically organised in a rather disorganised way under the common umbrella of the World Fair (Exposition Universelle), stretching over almost 6 months.

An avant-garde Abbott, already a trained golf aficionado, decided to take part in the golf event, being hosted at the Compiegne Club, which is about 30 miles north of the French capital.

Incidentally, this was the first Olympics in which women were allowed to take part and there were 9 women, who were in the fray for the top honours at the golfing green.

Abbott carded an emphatic nine-hole 47 to edge out her nine rivals to become the first-ever American woman Olympic champion.

Interestingly, one of her rivals in the event was her novelist mother Mary - the author of The Beverleys: A Story of Calcutta (1890) - who had finished 8th on that historic day of October 4, 1900.

As the winners of the Paris Olympics were given artefacts instead of the medals, Abbott was honoured with a porcelain bowl for her triumph.

However, the irony of her destiny was such that she wasn't even aware that golf was a part of the 1900 Paris Olympics as the 'Father of the modern Olympic Games', Baron Pierre de Coubertin, failed to publicise and properly brand the blue riband event in his homeland. 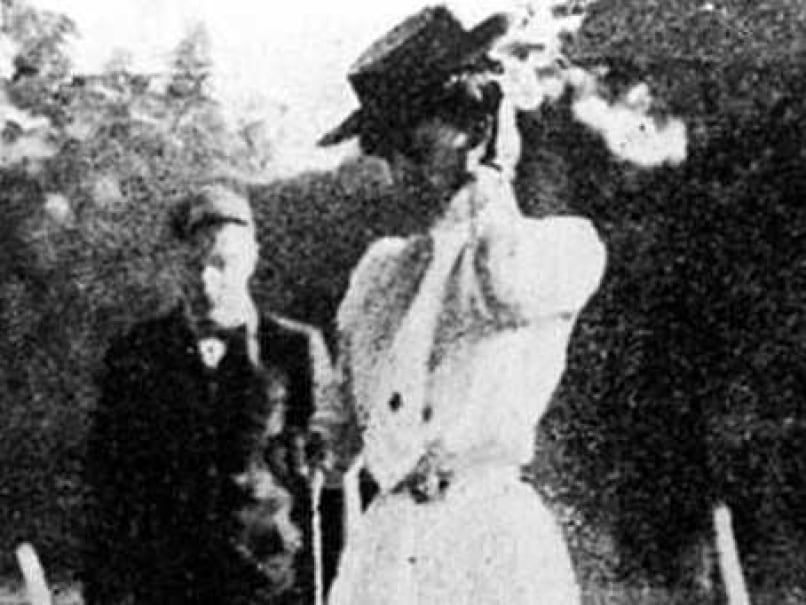 For Margaret Abbott, it was just another round of golf in Paris.

For Abbott, it was just another round of golf in a local event while her victory was the second ever Olympic win by a woman.

Soon, she fell in love with Finley Peter Dunne, the humourist and future creator of Mr Dooley, and eventually got married to him at her mother's residence in New York in 1902. Settled in her married life, Abbott, then Margaret Dunne became a mother of four and remained a homemaker for the rest of her life.

Unfortunately, both Abbott and the Olympic Games failed to recognise each other until her death in 1955. But a research, conducted by Paula Welch, a sports history professor at the University of Florida, unearthed the unparalleled Olympic glory of the pioneering gold medallist in the late 1980s and 1990s.

Welch's 10-year-long quest to find the first female American Olympic champion eventually revealed that the event, which Abbott, in her whole lifetime, thought as the "the International Golf Competition at Compiegne in connection with the Paris Exposition" was actually an Olympic event.

The renowned researcher managed to track down Abbott's famous yet ignorant family, who had no clue about her Olympic glory. One of her sons, Philip Dunne, was a popular Hollywood screenwriter, director and producer, whose works include How Green Was My Valley (1941), The Ghost and Mrs. Muir (1947), The Robe (1953) and The Agony and the Ecstasy (1965).

According to Philip, his mother had later explained to her family that she won the tournament "because all the French girls apparently misunderstood the nature of the game scheduled for that day and turned up to play in high heels and tight skirts".

But little did she know that her path-breaking Olympic triumph will remain unnoticed and unheralded for almost a century until Welch made India-born Abbott's colossal contribution to the history of Olympic sports public during the Atlanta Games in 1996 - the centenary year of the modern Olympics.

(The author is a sports writer & an International News Editor at CCTV News, Beijing)

Comments
Topics mentioned in this article
Olympics 2016 Golf Olympics
Get the latest updates on ICC T20 Worldcup 2022 and CWG 2022 check out the Schedule, Live Score and Medals Tally. Like us on Facebook or follow us on Twitter for more sports updates. You can also download the NDTV Cricket app for Android or iOS.