Thunder too good for misfiring Bulls

Oklahoma City Thunder was helped to victory by some terrible Chicago shooting, beating the Bulls 102-72 on Sunday in a surprisingly one-sided contest. 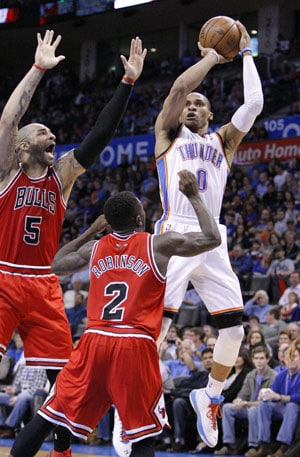 Oklahoma City Thunder was helped to victory by some terrible Chicago shooting, beating the Bulls 102-72 on Sunday in a surprisingly one-sided contest.

Russell Westbrook scored 23 points and Kevin Durant had 19 points and 16 rebounds for Oklahoma City, which moved 6-1/2 games clear atop the Northwest Division.

The Thunder, who had allowed an average of 113 points over their previous four games, broke out of a rough defensive patch by limiting Chicago to 29.1 percent shooting. Midway through the third quarter, Chicago had missed 44 of its 55 shots.

O.C. led 61-39 at that point, and the margin reached 32 with both teams' starters sitting out the fourth quarter.

Memphis' Zach Randolph had 16 points and 14 rebounds and Marc Gasol scored 14 points as the Grizzlies beat the Brooklyn Nets 76-72.

Deron Williams led Brooklyn with 24 points, but with Memphis boasting an 8-0 record this season when holding opponents below 80, the Nets did not do enough.

The San Antonio Spurs had six players in double figures as they beat the Phoenix Suns 97-87.

Patty Mills and Kawhi Leonard topped the scoring with 16 points for the Spurs, who finished their annual long journey - caused by a rodeo at their home court - at 7-2 to boost their NBA-best record to 45-13.

Marcin Gortat scored 21 for Phoenix, but only five in the first half as the Suns lost to the Spurs for the ninth time in 10 games.

Miami's LeBron James scored 28 points and Dwyane Wade scored 11 of his 24 in the final five minutes to lead the Heat to a 109-105 win over the Cleveland Cavaliers.

The Heat took a 22-point lead early in the second half, and scraped out their 11th straight win despite being outscored by a whopping 30 points over a 17-minute stretch. Miami was down by eight with 5:16 remaining, and still won.

Dion Waiters scored 26 points for Cleveland, which is 1-8 against the Heat since James left for Miami in July 2010.

New York's Carmelo Anthony scored 29 points, and Amare Stoudemire had a season-high 22, as the Knicks ended a four-game skid with a 99-93 win over the Philadelphia 76ers.

Anthony made 16 of 18 free throws and also was called for a flagrant foul for the fired-up Knicks, who have fallen behind Indiana into third place in the Eastern Conference and allowed their Atlantic Division lead over the Brooklyn Nets to shrink to two games.

Jrue Holiday had 30 points, five rebounds and five assists for the 76ers, who have lost eight straight road games.

Portland's Wesley Matthews had 24 points, including a clutch 3-pointer with less than a minute to go, to guide the Trail Blazers to a 92-86 win over the Boston Celtics, ending a run of seven straight losses.

Los Angeles' Kobe Bryant had 38 points to win a scoring duel against Dirk Nowitzki as the Lakers beat the Dallas Mavericks 103-99 in a clash of two teams staging late bids for a playoff spot.

Golden State's Jarrett Jack had 23 points and eight assists, and David Lee had 22 points and 13 rebounds to rally the Warriors to a 100-99 win over the Minnesota Timberwolves.

Comments
Topics mentioned in this article
NBA Lionel Messi
Get the latest Cricket news, check out the India cricket schedule, Cricket live score . Like us on Facebook or follow us on Twitter for more sports updates. You can also download the NDTV Cricket app for Android or iOS.