Richard Hamilton scored 20 points, Luol Deng added 19 and Chicago beat the New York Knicks 98-86 on Tuesday even though they were playing without their superstar point guard Derrick Rose again. 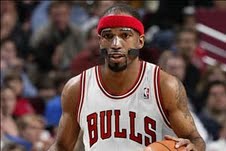 Richard Hamilton scored 20 points, Luol Deng added 19 and Chicago beat the New York Knicks 98-86 on Tuesday even though they were playing without their superstar point guard Derrick Rose again.

Hamilton had 18 points in the third quarter to help Chicago stay ahead after building a 12-point halftime lead. Kyle Korver added 14 points and three blocks, and the Bulls prevailed despite Carmelo Anthony's 29 points for New York.

"That's what I've been doing my whole career," Hamilton said. "But on this team, I've got to pick my moments. There are so many guys on this team that can score."

With their star sidelined again, this was a good time for Hamilton to step up.

Rose's latest injury is a sprained right ankle, which he suffered in Sunday's overtime loss at New York. He lobbied to play after warming up before Tuesday's game, but the Bulls improved to 16-7 without him.

"I just think it was the smart thing to do in this situation," coach Tom Thibodeau said. "If we're going to err, we're going to err on the side of caution. He wanted to play and we felt it was best that he didn't."

The league's reigning MVP, Rose was injured in the first half Sunday after returning from a 12-game absence because of a groin problem.

Rose wound up scoring 29 in that game, but shot only 8 of 26 and missed potential winning shots at the end of regulation and OT, as well as two free throws with the Bulls up by three with 19 seconds left in the fourth quarter.

He's missed 23 games because of a variety of ailments, including a turf toe injury and back spasms. Still, the Bulls managed to get back to winning after dropping three of four, beating a team they might meet in the first round of the playoffs.

They also moved three games ahead of Miami for the Eastern Conference lead, with the Heat visiting on Thursday and are trying to capture the No. 1 overall seed for the second straight year.

"If nothing else, if there's a Game 7, you want to play at home," Korver said. "We know that. But Thibs preaches every day, 'One game at a time, one game at a time.' We're a brainwashed bunch."

Anthony came up big again for the Knicks after scoring a season-high 43 and hitting the go-ahead 3 in overtime on Sunday, but New York got pounded on the boards 51-33.

The Bulls outscored the Knicks 25-5 on second-chance points and cut down on the turnovers, finishing with 12 after committing 20 in the previous game.

"We got outrebounded," Anthony said. "They beat us on the boards. I got two rebounds. I've got to do better than that."

Then again, as Tyson Chandler said, Anthony was the "one bright spot" for New York. Chandler did have 15 rebounds, but otherwise, it was a mismatch on the glass.

"That's kind of their game," he said. "They attack the basket. They get you out of position and then the big guys come and crash the boards. We didn't do a good job of boxing out."

Deng had 10 rebounds and hit 3 of 6 3-pointers while trying to contain Anthony. Korver was 3 of 5 from long range and had 11 points in the fourth quarter.

Hamilton played just 20 minutes because he's missed most of the season because of injuries, but he was his usual active self, running off screens and wearing out the opposition. He certainly made the most of his time, particularly in the third.

The Knicks got to 53-50 early in the quarter, but Hamilton answered with a 20-footer and two free throws. Deng then made a 3 to make it a 10-point game, and the Bulls stayed in control after that.

"(Hamilton's) putting a lot of work in," Thibodeau said. "He's getting more comfortable. You can see his rhythm coming around."

Comments
Topics mentioned in this article
NBA Chicago Bulls Lionel Messi
Get the latest Cricket news, check out the India cricket schedule, Cricket live score . Like us on Facebook or follow us on Twitter for more sports updates. You can also download the NDTV Cricket app for Android or iOS.