The Orlando Magic, coming off a 10-game losing sequence, pulled off a shock result by beating the Los Angeles Clippers 104-101 on Saturday. 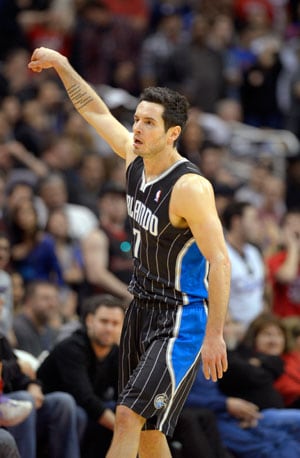 The Orlando Magic, coming off a 10-game losing sequence, pulled off a shock result by beating the Los Angeles Clippers 104-101 on Saturday.

Orlando's J.J. Redick gave the visitors their first lead with a 3-pointer with 42 seconds left and they held on to end the Clippers franchise-record streak of 13 consecutive home wins.

Elsewhere, Dallas had a comfortable win over a Sacramento side perhaps still thinking about its big win the previous night, Mario Chalmers tied a Miami franchise record with 10 3-pointers as the Heat beat Sacramento and Philadelphia ended a five-game skid by beating Houston.

Orlando's Arron Afflalo tied his season high with 30 points and Redick had 21 for the injury-riddled Magic, who ended the franchise's worst losing sequence in nine years.

Los Angeles guard Chris Paul went down holding his right knee with 54 seconds to go. He returned after a timeout and hit a 15-footer to draw his team within one with 33 seconds left, but the Clippers then turned over the ball and lost their chance to snatch back the lead.

The Dallas Mavericks won consecutive games for the first time in a month, beating the Memphis Grizzlies 104-83.

Shawn Marion scored a season-high 20 points and Dirk Nowitzki added 17 for Dallas, which had all five starters in double figures.

The Grizzlies were ragged a night after a big overtime win against Southwest Division-leading San Antonio. Memphis shot 38 percent and Rudy Gay was the only starter in double figures, with just 12 points.

Miami's Chalmers tied the franchise record for 3s, jointly held by Brian Shaw, and broke the Sacramento stadium record with 10 longshots as the Heat beat the Kings 128-99.

He also had a career-best 34 points while LeBron James had 20 points, seven assists, five steals and a pair of blocks for the Heat, who notched their highest score of the season.

Isaiah Thomas made six 3-pointers and scored a career-high 34 points for the Kings, who dropped their fourth straight game.

Philadelphia's Jrue Holliday had 30 points as the 76ers beat the Houston Rockets 107-100.

Thaddeus Young had 18 points and 12 rebounds for the Sixers, who opened a stretch of 12 home games in the next 13 and hope they can play their way back into playoff contention after a tough 2-6 road trip.

The Utah Jazz hung on in a seesawing contest to edge the Detroit Piston 90-87.

Utah's Al Jefferson scored 10 of his 20 points in the third quarter as the Jazz put together a 25-11 run that put them in the lead. Paul Millsap and Randy Foye each had 17 for the visitors.

Detroit trailed by 13 points with 3:26 left but fought their way back and still had a chance to win but Brandon Knight missed a 3-pointer in the final seconds that would have tied the game. Knight had 16 points.

The Phoenix Suns ended a five-game losing slump by winning 97-81 at the Chicago Bulls.

Luis Scola scored 22 points and Michael Beasley added 20 points for Phoenix, which had lost 12 straight on the road but lifted to notch the franchise's 2,000th win.

Carlos Boozer had 15 points and 10 rebounds for the Bulls.

The Indiana Pacers stretched their winning sequence to four games by beating the Charlotte Bobcats 96-88.

George Hill scored 19 points and D.J. Augustin added a season-high 18 for the Pacers, while Ben Gordon had 21 points for the Bobcats.

The Washington Wizards won back-to-back games for the first time this season - improving their league-worst record to 6-28 - by beating the Atlanta Hawks 93-83.

Comments
Topics mentioned in this article
Los Angeles Clippers Orlando Magic Dwight Howard NBA
Get the latest Cricket news, check out the India cricket schedule, Cricket live score . Like us on Facebook or follow us on Twitter for more sports updates. You can also download the NDTV Cricket app for Android or iOS.