Russell Westbrook had 27 points and nine assists, Kevin Durant added 25 points and the Oklahoma City Thunder blasted the weary Los Angeles Lakers 119-90 on Monday in the opening game of the Western Conference semifinals. 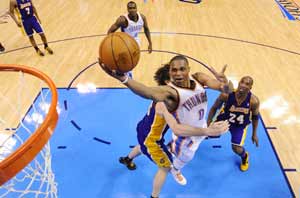 Russell Westbrook had 27 points and nine assists, Kevin Durant added 25 points and the Oklahoma City Thunder blasted the weary Los Angeles Lakers 119-90 on Monday in the opening game of the Western Conference semifinals.

The Thunder took a 15-point halftime lead, then opened the third quarter with a 15-2 blitz filled with crowd-pleasing 3-pointers and dunks.

Oklahoma City led by as many as 35 points, getting a measure of vengeance for the elbow Metta World Peace delivered to the head of the Thunder's James Harden three weeks earlier, and without needing dirty tactics to do it.

Thunder starting center Kendrick Perkins limped off after aggravating a hip injury from the first round.

Kobe Bryant and Andrew Bynum scored 20 points each for the Lakers and Bynum had 14 rebounds.

Two games after trailing by as many as 28 points in a blowout loss in Game 6 in Denver, it got even worse for the Lakers. They responded to that loss by beating the Nuggets 96-87 in a thrilling Game 7 on Saturday.

They'll need another big bounce back for Game 2 in Oklahoma City on Wednesday.

While the Lakers were making a quick turnaround less than 48 hours after ending the first round, the Thunder had eight full days off following their first-round sweep of defending NBA champion Dallas.

It got out of hand just after halftime, in highlight-reel fashion.

Durant lobbed the ball to Westbrook for a two-handed slam, then connected on a 3-pointer from the left wing to draw a timeout from Lakers coach Mike Brown.

That still didn't slow down Oklahoma City, which got what could have been a costly two-handed dunk from Perkins on its next trip and then another 3 from Durant before Thabo Sefolosha swiped the ball from Bryant and ran out for a layup that made it 74-46 with 8:39 left in the period.

Both coaches started going to their benches with 81/2 minutes left, and Los Angeles reserve Devin Ebanks ended up getting ejected with 2:18 to play after walking up to a scrum for the ball after the whistle. Official Greg Willard said at the scorer's table that he was ejected for "what he said" in drawing a technical foul.

It ended up tying for the 12th-worst blowout in Lakers playoff history.

Perkins returned to the bench but did not come back into the game after getting hurt. He had missed most of the week of practice after straining a muscle in his right hip in the final game of the Dallas series.

The buildup to the game focused largely on it being the first meeting between the teams since World Peace gave Harden a concussion by elbowing him in the head three weeks ago, in the final stretch of the regular season.

A sold-out crowd at Chesapeake Energy Arena wasn't nearly as happy to see him back, although World Peace - who changed his name from Ron Artest - was hardly fazed by the chorus of boos that greeted him during pregame introductions or again whenever the ball came his way.

World Peace knocked down a 3-pointer from the top of the key amid boos the first time he touched the ball, set up a two-handed jam by Bynum and drilled another 3 within the first 21/2 minutes.

The Thunder turned an early six-point deficit around with a 19-7 run punctuated by Harden's driving layup that led to a three-point play and a 25-19 lead, and they never trailed again.

If the Lakers' legs were weary, it showed most on the defensive end. Oklahoma City shot 53 percent and the league's most turnover-prone team committed only one - Harden's failed alley-oop pass for Durant that banged off the glass and was grabbed by World Peace,Â  while building a 59-44 halftime lead.