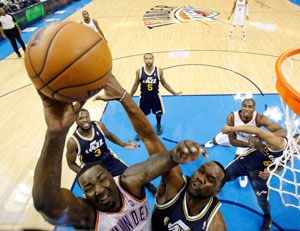 Russell Westbrook added 23 points and 13 rebounds for the Thunder, who won all three games in their homestand by double digits.

Utah's Enes Kanter scored a career-high 18 points, with 14 coming in the fourth quarter as the Jazz pulled within five before Oklahoma City closed it out.

Elsewhere on Friday, Brooklyn, New York and Memphis were among the other early-season pacesetters who recorded wins, though some strugglers also gained much-needed victories, notably Toronto and Cleveland.

The Thunder joined San Antonio on a league-leading 13 wins, but the best winning percentage belongs to the surprising Memphis Grizzlies, who moved to 12-2 with a 90-78 home win over the Detroit Pistons.

Rudy Gay had 18 points, while Marc Gasol and Mike Conley added 17 apiece for Memphis against a Detroit team that has won only one of 10 road games this season.

The Atlantic Division is the most closely contested division in the early part of the campaign, with just 2 1-2 games separating the top four teams after all four won again.

Brooklyn Nets and the New York Knicks are joint leaders. Brooklyn maintained that status with a 98-86 win at Orlando Magic, with Joe Johnson contributing 22 points to the Nets fifth-straight win. Gerald Wallace added 20 points, including five 3-pointers, as all five Brooklyn starters scored in double figures.

The Knicks kept pace with a predictable 108-97 home win over the hapless Washington Wizards. Carmelo Anthony and J.R. Smith each scored 20 points as New York beat the Wizards for the 10th straight time and made it 6-0 at Madison Square Garden this season.

The Philadelphia 76ers kept right on the tails of the leaders with a 104-98 win over the Charlotte Bobcats. Evan Turner scored 25 points while Jason Richardson hit four late 3-pointers to secure the victory.

The Boston Celtics too remain in the Atlantic mix after a 96-78 home win over the Portland Trail Blazers. Even without the suspended Rajon Rondo, Boston still cruised to a comfortable win thanks to 19 points from Jeff Green and 17 for Jason Terry.

On the other coast, the sharp-shooting Los Angeles Lakers moved back to parity with an 8-8 record by downing the Denver Nuggets 122-103. The Lakers sank 17 3-pointers, tying the club record.

Antawn Jamison became the first Laker in 14 years to score 30 points in a game, finishing with 33 to lead an outstanding game by the L.A. bench. Dwight Howard had 28 points and 20 rebounds.

The Minnesota Timberwolves had a 95-85 win over the Milwaukee Bucks, guided to victory by Alexey Shved, who had 10 of his 16 points in the fourth quarter. Kevin Love overcame a stomach bug to collect 15 points and 14 rebounds.

In the closest finish of the day, the Cleveland Cavaliers ended a four-game losing skid by edging the Atlanta Hawks 113-111, with Alonzo Gee scoring on a putback with less than 1 second remaining. The Hawks, out of timeouts, couldn't manage a shot before time expired and lost for the first time in seven games.

Indiana's David West had 31 points and 11 rebounds to help Indiana edge Sacramento 97-92. West was 13 for 20 from the field and 5 for 7 at the line in his season-best scoring performance. He is averaging 23 points over the past five games, four of them Indiana victories.

The Toronto Raptors halted a six-game slide by defeating the Phoenix Suns 101-97. Toronto's DeMar DeRozan scored 23 points in a game that represented a reversal of fortunes, as Phoenix had won seven in a row in Canada.

Comments
Topics mentioned in this article
NBA Kevin Durant C.J. Miles Los Angeles Lakers Utah Jazz Al Jefferson Gordon Hayward Cleveland Cavaliers Russell Westbrook
Get the latest updates on ICC T20 Worldcup 2022, check out the Schedule and Live Score. Like us on Facebook or follow us on Twitter for more sports updates. You can also download the NDTV Cricket app for Android or iOS.