Los Angeles Lakers advanced to their first NBA final four since the Kobe Bryant-led Lakers beat Phoenix for the conference title and then defeated Boston for the 2010 NBA championship. 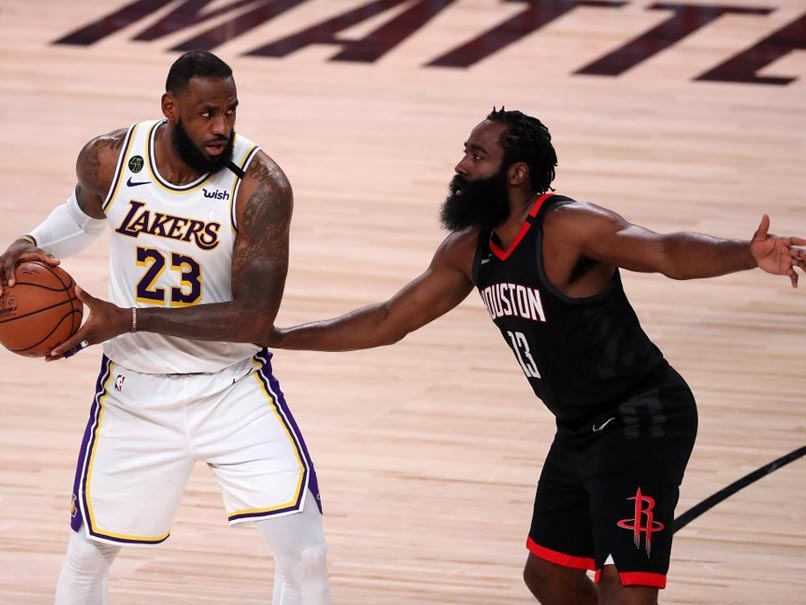 LeBron Jameshad 29 points, 11 rebounds and seven assists as the Los Angeles Lakersadvanced to their first NBA Western Conference final in a decade with a 119-96 blowout win over the Houston Rockets on Saturday.  Anthony Davis tallied 13 points and 11 rebounds, Kyle Kuzma had 17 and Markieff Morris finished with 16 for the Lakers, who eliminated the Rockets in five games in the quarantine bubble in Orlando, Florida. Los Angeles advanced to their first NBA final four since the Kobe Bryant-led Lakers beat Phoenix for the conference title and then defeated Boston for the 2010 NBA championship, the last time they won.

"It's the reason I wanted to be a part of this franchise is to take them back to a place they were accustomed to being. And that's competing for a championship," said James.

"It's an honour for me to wear the purple and gold and for us to just try to continue the legacy and just play great basketball for our fans."

This will be James's 11th career conference finals but when asked by reporters how it feels, he changed the subject to talk about the group as a whole.

"Every game is a learning experience for us. Every game is another opportunity for us to get better. We want to continue to build," said James.

They will face either the Los Angeles Clippers or the Denver Nuggets in the next playoff round. The Clippers lead that series 3-2.

The Lakers got off to their best start of the series, dominating the opening plays to take a 35-20 lead at the end of the first quarter.

Their only lull of the game came in the start of the second quarter when Houston briefly woke from their slumber and cut the lead to seven, 38-31.

But the Lakers outscored the Rockets 33-18 in the third to take full command.

They drained 19 three-pointers and shot 52 percent from the floor.

With the game in hand, the Lakers sat three-time NBA champion James and Davis for much of the fourth quarter.

"Everything is falling into place. When I got here the goal was to win a championship and now we are eight wins away," said Davis.

- 'A piece away' -
Once again the James Harden-led Rockets put up little resistance as Houston, after surprising the Lakers in game one of the series, lost their fourth straight and their third in a row by more than 10 points.

Harden led the Rockets with 30 points and Russell Westbrook scored just 10 in the loss.

Harden had a disappointing series, delivering another series of fourth-quarter playoff disappearing acts that have pockmarked his career.

"Tough season for us. Obviously it didn't end the way we wanted it to. So, we just got to figure it out," he said.

In the past five years, Harden has shot less than 25 percent from beyond the arc in post-season fourth quarters and overtime. He finished two-of-eight from three-point range on Saturday.

Harden said Saturday all they need to become great is to add one more piece to the puzzle.

"I feel like we're a piece away and we've just got keep trying to figure it out. Keep trying to put the pieces around me and Russ to get us where we want to go," said Harden.

Tempers flared in the fourth quarter both on and off the floor. The brother of Lakers Rajon Rondo now has the dubious honour of being the first fan thrown out of a bubble game after he exchanged words with Houston's Westbrook.

The public is not allowed in the arena because of the coronavirus pandemic but players are allowed to invite a limited number of family and friends to watch the games in person.

Rockets coach Mike D'Antoni, whose contract expires at the end of the season, couldn't say whether he will be back.

"We'll see what happens. I had four years. Hopefully it keeps going, but you just never know," he said.

Comments
Topics mentioned in this article
Los Angeles Lakers Houston Rockets LeBron James NBA
Get the latest updates on ICC T20 Worldcup 2022 and CWG 2022 check out the Schedule, Live Score and Medals Tally. Like us on Facebook or follow us on Twitter for more sports updates. You can also download the NDTV Cricket app for Android or iOS.