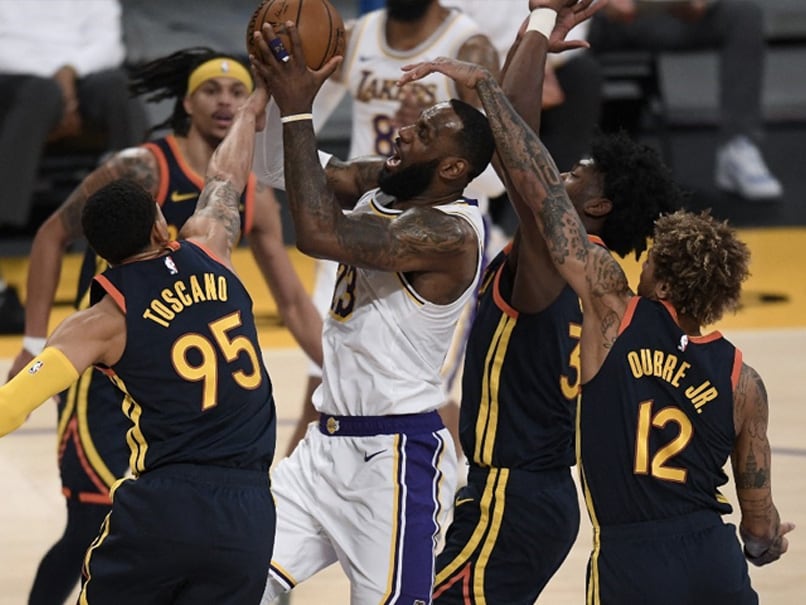 LeBron James scored 19 points and had plenty of time to sit back and enjoy the Los Angeles Lakers' 117-91 NBA victory over the Golden State Warriors on Sunday. James, playing in his 1,300th regular-season game, added six rebounds, four assists, two steals and two blocked shots in just 24 minutes on court. He sat out all of the fourth quarter along with the rest of the starters from both teams as the Lakers closed out what had become a tough February with a dominant victory despite the continuing absence of star forward Anthony Davis.

The NBA champions, who lost five of their first six with Anthony sidelined, have now won two straight.

"When you lose a mega-piece like AD, it's going to take some time both offensively and defensively," James said of the adjustments required.

He said careful film study had helped the Lakers tighten up their defense and players had become more comfortable in their roles with Davis sidelined -- an absence that Lakers coach Frank Vogel acknowledged, calling on them to develop a "little bit of a new identity."

Six Lakers scored in double figures as they avenged a narrow loss to the Warriors in January.

James capped an overwhelming first half with a pull-up three-pointer that put the Lakers up 73-44.

Eric Paschall led the Warriors with 18 points off the bench as star Stephen Curry was limited to 16.

The end of the Warriors' three-game winning streak was made more painful with departure of Draymond Green with a sprained left ankle in the second quarter.

The Lakers' win wasn't even the most lopsided of the night. That belonged to the Memphis Grizzlies, who trounced the slumping Houston Rockets 133-84.

However, there was plenty of drama in Boston, where forward Jayson Tatum drove for two baskets in the final 15 seconds to lead the Celtics to a 111-110 come-from-behind victory over the Washington Wizards.

Tatum scored 31 points and the Celtics withstood a 46-point performance from Washington's Bradley Beal to complete their first back-to-back wins since January.

Kemba Walker scored 21 points for Boston, who had 20 points and nine rebounds from Daniel Theis.

Russell Westbrook scored 24 points and pulled down 11 rebounds for the Wizards.

The Celtics trailed by five with 46.9 seconds remaining. Tatum cut the deficit with a driving finger-roll layup and with 4.7 seconds left spun and drove through traffic for the go-ahead basket and the Boston escaped with the win.

"Jayson's will really shone through," Celtics coach Brad Stevens said. "It's been a tough stretch for (Tatum), but this matters to him, he wants to win, and he made big plays."

In Milwaukee, Giannis Antetokounmpo scored 17 of the Bucks' last 22 points in a 105-100 victory over the Los Angeles Clippers.

Down by seven early in the fourth quarter, the Bucks took a 101-100 lead on two Antetokounmpo free throws with 1:57 remaining.

With 10.3 seconds remaining, Khris Middleton found Antetokounmpo for a one-handed slam that made it 103-100 and after Kawhi Leonard's potential game-tying three-pointer bounced off the front of the rim Middleton grabbed the rebound and made two free throws to seal the win.

The Clippers went scoreless over the last four minutes, with Leonard and Paul George both coming up empty on multiple possessions.

"I was just trying to be aggressive and I knew it was going to work out," Antetokounmpo said. "(I) tried to find my teammates, just go downhill and create opportunities so my teammates can have an open shot or I can go all the way to the rim or make something for myself."

He added 14 rebounds and five assists and Middleton scored 19 points with eight assists for a Bucks team that welcomed back point guard Jrue Holiday after a 10-game absence because of NBA coronavirus protocols.

Comments
Topics mentioned in this article
Los Angeles Lakers Golden State Warriors LeBron James NBA
Get the latest updates on IPL 2021, check out the IPL 2021 Schedule and Indian Premier League Live Score . Like us on Facebook or follow us on Twitter for more sports updates. You can also download the NDTV Cricket app for Android or iOS.