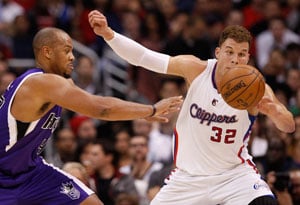 The previous mark of 11 consecutive wins was set by the Buffalo Braves during the 1974-75 season, when current Clippers coach Vinny Del Negro was 8 years old.

The current streak includes victories over some of the league's worst teams - New Orleans, Charlotte, Toronto, Detroit, Phoenix and Sacramento--although the Clippers do have wins over some of the best teams this season, too.

Chris Paul had 24 points and 13 assists and Blake Griffin had 21 points and 13 rebounds for the Clippers, who have had 20 double-digit losing streaks since their 11-game winning streak in Buffalo - including a dozen of 12 or more.

The Chicago Bulls beat the New York Knicks for the second time this season, 110-106, in a foul-filled game that saw New York coach Mike Woodson, Carmelo Anthony and two other players ejected.

Anthony scored 29 points for the Knicks before being ejected with 6:45 left when he was whistled for a foul on Chicago's Joakim Noah and had words with the referee.

Woodson was also ejected in the fourth quarter following his second technical foul, and Noah and Knicks center Tyson Chandler were tossed after an altercation late in the game.

Luol Deng had season highs of 29 points and 13 rebounds despite briefly leaving the game with an injured left shoulder. Marco Belinelli added 22 points as Chicago won for the fourth time in five games.

Back home after playing six of their past seven games on the road, San Antonio also got 13 points from Manu Ginobili and 12 from Boris Diaw.

Golden State's David Lee had 23 points, 11 rebounds and a career-high 11 assists and Stephen Curry set a career high with eight 3-pointers as the Warriors extended the Charlotte Bobcats' losing streak to 14 games with a 115-100 victory.

Gerald Henderson scored a season-high 23 points for the Bobcats, who haven't won since Nov. 4.

Milwaukee's Monta Ellis scored five of his 27 points in overtime to lead the Bucks past the Boston Celtics 99-94.

The Bucks won for the sixth time in eight games, while the Celtics had their five-game home winning streak broken despite 35 points by Paul Pierce.

Pierce, who scored 40 points in Boston's previous game, sent the game to overtime by hitting a 3 with 2.5 seconds left.

Memphis won its fourth straight game as Rudy Gay scored 26 points and Zach Randolph had 17 points and 13 rebounds to lead the Grizzlies past the Dallas Mavericks 92-82.

O.J. Mayo, the Mavericks' leading scorer, had just 10 points on 3-of-11 shooting in his first game against his former team after being traded to Dallas in the offseason.

The Toronto Raptors extended their winning streak to five games as DeMar DeRozan scored 17 points and Jose Calderon added 13 points and nine assists in a 93-90 victory over the Orlando Magic.

Rookie Terrence Ross scored seven of his 13 points in the fourth quarter for the Raptors, who also lost Lithuanian center Jonas Valanciunas to a broken finger in the first quarter.

Aaron Afflalo scored 26 points for the Magic, who lost for the first time in five games.

Philadelphia's Thaddeus Young had 18 points and 11 rebounds to help the 76ers end a five-game losing streak with a 99-80 win over the Atlanta Hawks.

The Sixers learned before the game that injured center Andrew Bynum has been cleared to begin exercising again after suffering bone bruises in his knees. There is still no timetable for when he can make his season debut with the team.

The Indiana Pacers handed the struggling Cleveland Cavaliers their sixth straight defeat with a 99-89 win in Cleveland.

Roy Hibbert scored 18 points and Lance Stephenson added 16 for the Pacers, who won for the fifth time in six games.

The Detroit Pistons ended a six-game losing streak with a 100-68 rout of the NBA-worst Washington Wizards.

Greg Monroe had 15 points and rookie Andre Drummond added 11 points and a career-high 14 rebounds for the Pistons, who hadn't beaten anyone other than the Cavaliers since late November.

Comments
Topics mentioned in this article
NBA Sacramento Kings Los Angeles Clippers
Get the latest Cricket news, check out the India cricket schedule, Cricket live score . Like us on Facebook or follow us on Twitter for more sports updates. You can also download the NDTV Cricket app for Android or iOS.